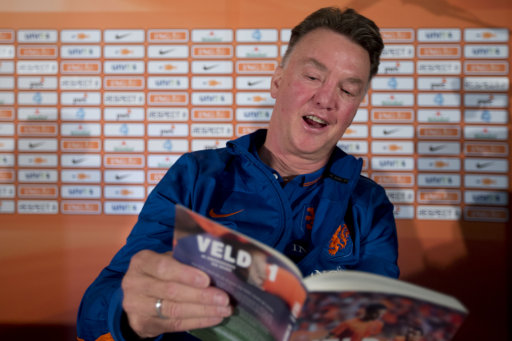 The rules are as follows…

Congratulations on obtaining Louis van Gaal. From this moment on, you will be patronised, looked at with disdain, and haunted by a constant doubt if Mr. Van Gaal is flat out making fun of you or being deadly serious.

1. Be prepared for any possible mood. Contrary to many other managers, whether the match is won, drawn or lost is no indication whatsoever of Van Gaal’s mood. Even if he has won and seems to be quite happy, one wrong question can – and will – put him off.

2. Start neutral. Begin with a question about the match just played. “How did your team do?” or “What did you think?” will suffice. “You must be very disappointed” will not. That is because the match you saw and the match he saw can be very different ones. Mr. Van Gaal is perfectly comfortable declaring that a 0-3 loss at home to Sunderland was his team’s best game all season, just because his players were doing what he told them to do. It’s not always about what ends up on the scoreboard. Don’t enter the interview thinking it is.

3. Don’t introduce yourself. Or else he’ll know your name, remember it and use it against you. You will not be some anonymous guy with a microphone and a cameraman on his side; you will be Gary, or Clive, or Tony, with whom he will or will not have a feud from the get-go. (He will.)

4. Stay on topic. If the interview’s about the game, you talk about the game. Not about the next game, transfer rumours or whatever happened on the training pitch. Every question about anything else than the game just played will derail the conversation.

5. It’s his language now, not yours. Mr. Van Gaal will come up with new additions to the Oxford Dictionary. In Germany, he inadvertently (or was it?) introduced the phrase “Der Tod oder die Gladiolen”, a Dutch saying meaning literally “death or the gladioli”: all or nothing. This is because if Mr. Van Gaal speaks your language, it is no longer your language, it’s his. It is not Mr. Van Gaal who has trouble speaking English, it is you, for not going along with his obviously much better interpretation of it.

6. Try to avoid the meta-interview. An interview with Mr. Van Gaal will almost inevitably wind up being an interview about the interview, or more specifically, him asking questions about your questions. This will be the moment you feel the conversation is slipping away from you. Switch back to the studio, or it will end up on YouTube.

7. Don’t repeat the question. Never mind – you will fail at this. You won’t fool him, even if you think your follow-up question is a cleverly rephrased, well disguised one. He’ll say: “I just told you”. This is inevitable. Don’t try to avoid it, just try to get past it without crashing, like you would at a speed bump.

8. Keep on your toes. At some point, you will think Mr. Van Gaal is joking. Sure, he does it with a straight face, but he’s joking, he must be. He’s mocking you. Or is he really this angry about this little thing you just said? No – it can’t be. You start to stammer. Ha! He’s just taking a… wait, is he? You will never know, as only Mr. Van Gaal knows. And he never breaks character.

9. Distinguish fact from opinion. This is hard, as only Mr. Van Gaal can determine which are facts and which are opinions. Which team was disadvantaged by the ref, or which team should have won based on the number of chances? He, and only he, will have the answer. These are the facts. Your facts are opinions. After the 1-1 draw of Holland against Ecuador last Saturday, he called the 0-1 an “unfortunate ball moment”: nothing to do about it. In Mr. Van Gaal’s world, this makes perfect sense. In your world it may not, but you are not to point this out, as he will call you dumb.

10. Stay under three minutes. Try to get everything you need within that window. After that, the chances of hitting a conversational speed bump will statistically rise. You’ll start wandering into other realms of conversation (how about this or that rumour, Mr. Van Gaal?), or you will ask a question a second time, or he will say you did. After that, you’re on your own. Good luck, mate.

In short: It’s an absolute bloody minefield. This could get interesting!