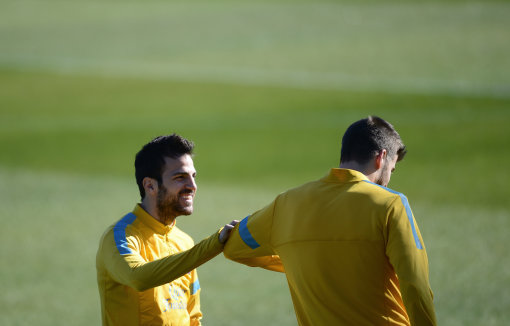 “Psst. The skies over Moscow are unusually red for this time of year…”

Given that our conversational Spanish is a little on the “non-existent” side, we’re not entirely sure if these subtitles are kosher, but it’s being rumoured that Gerard Pique has accidentally-on-purpose let the cat out of the bag vis-a-vis the ongoing Cesc Fabregas saga.

Barcelona are understood to want shot of Fabregas this summer with a clutch of Premier League sides laying in wait, and, in comments picked up by the mikes at a recent Spain press conference, it seems the midfielder has confided in Pique that he’s already agreed a move.

Now, Pies are 101% convinced that Pique knows exactly what he’s doing and is just having a lark by screwing with us here.

That said, feel free to jump to any conclusions you see fit.