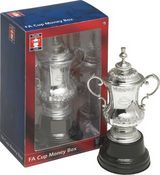 The FA must be dying to see England’s two best teams (Man Utd and Chelsea) grace the new Wembley, and I wasn’t surprised to see the semi-final draw keep the pair apart. Scott Murray, writing in today’s Guardian sports blog, claims that he wants nothing more than a gloriously unfashionable Blackburn v Watford final. It’s a predictable, crowd-pleasing piece â€“ and he’s right to point out that several ‘dream finals’ in recent years have failed to spark â€“ but would the neutral really want to sit through 90 minutes of Blackburn v Watford? Apologies to Blackburn and Watford fans, but I’d much rather see Man U and Chelsea go at it – not only because the teams are stuffed with great players, but I think it would be fitting in a season where either could win a treble (or quadruple in Chelsea’s case) that one piece of the silverware jigsaw gets decided at the new Wembley.