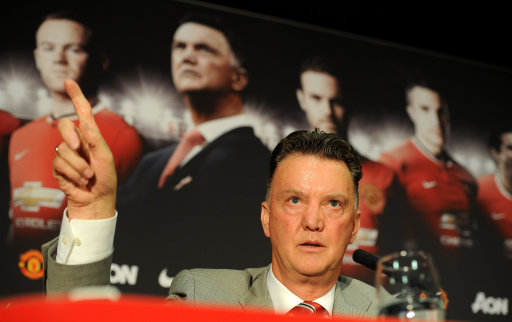 Alas, it would appear that, despite costing a whacking great £27million, Manchester United summer signing Luke Shaw is a way off being ready for first-team duties as far as Louis van Gaal is concerned, with the new United boss reportedly forcing the 19-year-old full-back to train alone on a specialised programme in order to reach the stringent fitness level required of him.

According to the Guardian, Van Gaal had Shaw train away from the rest of the United squad at Washington’s FedEx Field yesterday, with the England international repeatedly running lengths of the left flank and delivering crosses into the box before “sitting out for large parts of the remainder of the session”.

Speaking to the press after training, Van Gaal was asked why Shaw was being made to train alone, to which he replied:

“[Shaw] is okay, but I am always a trainer-coach who sees individuals and what they need.

“He needs to be fit and is not very fit and fit enough to do what I want.

“He needs to train individually until he is fit.”

Van Gaal was then asked whether he was surprised that the fitness of a player who went to a World Cup and then reported back to training less than three weeks later could drop so dramatically.

“I cannot judge that, but I see what I see. I have spoken with him and we have made a programme for him. He agreed with me,” said Van Gaal.

“I have heard good messages from Strud [Tony Strudwick, fitness coach], but we have to see.”

Call us old fashioned, but if Pies spunked £27million on a left-back we’d want him ready to go straight out of the box.