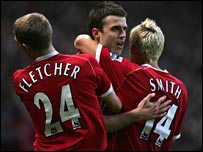 Another three points in the bag for United, whose lead over Chelsea stretches to six points (seven effectively thanks to their far superior goal difference). Michael Carrick latched on to Cristiano Ronaldo’s through ball to score the opener after just four minutes. Carrick is having a very good second half of the season. His calm, measured play in central midfield really complements the likes of Ronaldo, Scholes and Rooney.
United doubled their lead on 50 minutes, Wayne Rooney driving home a fierce shot after his lovely first touch had cushioned a lobbed pass by Ryan Giggs. Job done, Chelsea behind the eight ball again. You can see highlights of the game here.