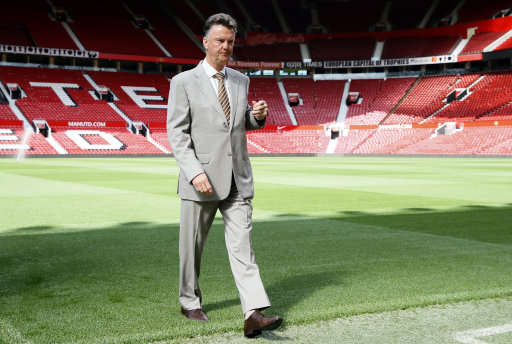 “You can tell by the way I ushe my walk, I’m a womansh man”

We can’t say it’s ever registered with us, but apparently Louis van Gaal’s grasp of English is so hilariously bad that a Dutch college are using the Manchester United manager as an example to their students of how NOT to speak the language.

Lecturers at the Kalsbeek College in Woerden (near Utrecht) apparently reckon that Van Gaal’s broken English, complete with “stereotypical” Dutch accent is almost cartoonishly bad and, as such, are using clips of the United coach’s press conferences to steer their students clear of falling into all of the common pitfalls.

According to a report in Dutch paper Het Laatste Nieuws, Van Gaal makes “all the classic Dutch pronunciation mistakes” – for example: saying “sink” instead of “think” and pronouncing the English word “but” in the same way that the Dutch pronounce their word for “arse”.

Kalsbeek professor Bram van Welie has reportedly even taken to taping up photos of Van Gaal in the college’s exam hall to remind his students not to fall into the trap of speaking like the United boss during their oral exams.

“He’s really stereotypical,” Van Welie told HLN. “Which is why he is such a huge fun example!”

Apparently, Van Gaal’s slapstick English is fairly well documented in the Netherlands, with Dutch comedy show “Cojones” even broaching the subject in a sketch of theirs…

Sounds pretty spot on to us!