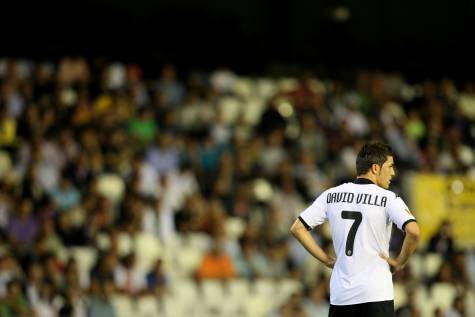 Manchester United are ready to steal a march on their rivals (probably every other major club in Europe) by submitting a huge £40 million bid for Valencia striker David Villa before the World Cup gets underway in June.

United have reportedly sent scouts to nearly every Valencia game this season and Chief Scout Martin Ferguson (brother of manager Sir Alex) has urged the club to make their move after watching Villa net a hat-trick in Los Che’s 4-4 draw with Werder Bremen in the Europa League last week.

It is widely believed that 28-year-old Villa will finally leave Valencia this summer, and the Spanish ace has gone on record expressing his love for United’s brand of attacking football on numerous occasions – which seemingly puts them firmly in the hot seat should Villa chose a move to The Premier League.

Now don’t get me wrong, I’d love to see Villa plying his trade in the Prem as much as the next man – the guy is a ridiculously good striker- but £40 million? Surely that’s a bit rich for a player who isn’t exactly a spring chicken anymore?