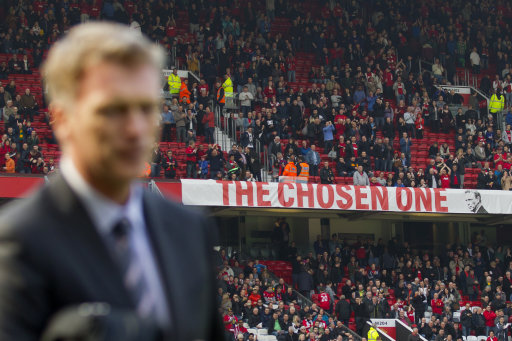 In a bid to finally lay old ghosts to rest once and for all, a group of Manchester United fans are seeking to auction off their David Moyes ‘Chosen One’ banner and give all the proceeds to charidee.

According to the Telegraph‘s northern football correspondent Mark Ogden, the United supporters group responsible for printing the banner in the first place, Stretford Flags, are keen to flog the damned thing in order to “avoid the much-ridiculed tribute…gathering dust in an Old Trafford storage room”.

Referring to Moyes’ inauguration as Sir Alex Ferguson’s hand-picked heir at United, the banner became a source of much mirth as the Moyesian era went tits-up in a hurry.

Last Pies heard, the banner was offered as a donation to the National Football Museum – though, obviously, it was passed on for one reason or another.

Anyway, Ogden also reports that the stout Stretford Flags chaps remain unperturbed despite blowing £500 of their own money on the Moyes banner, and have indeed begun drawing up plans for a replacement.