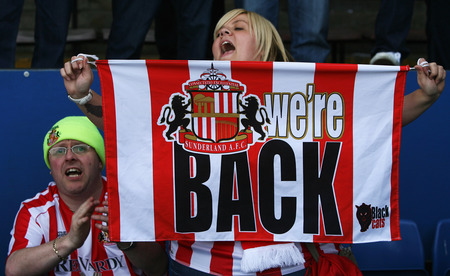 And so, after a mighty slog of a season, we now know the champions in each of English football’s top four divisions, Keep posted for a full review of the season this week.

Premiership: Manchester United
Here’s Sir Alex Ferguson’s reaction to winning the title. Man Utd thoroughly deserved to pip Chelsea to the title, although it would be churlish not to acknowledge the Chavs’ never-say-die attitude – even when 1-0 down and one man down to Arsenal, they still believed that they could come back and win. But United played the most thrilling football, as their stunning +57 goal difference shows. Congrats to all at Old Trafford.
Championship: Sunderland
Nothing like a 5-0 win to seal the title. Roy Keane’s achievement in dragging Sunderland from relegation fodder to champions is one of the most remarkable managerial feats in English football history – don’t forget that he is a total novice at the job.
League One: Scunthorpe
What a memorable season for the Iron, who had been crowned champions even before their 3-0 win at Carlisle rounded off the perfect season.
League Two: Walsall
Joy unconfined at Swindon, as a 1-1 draw ensured that both Swindon and Walsall were promoted automatically, with Walsall going up as champions.
[Photo: Getty Images]