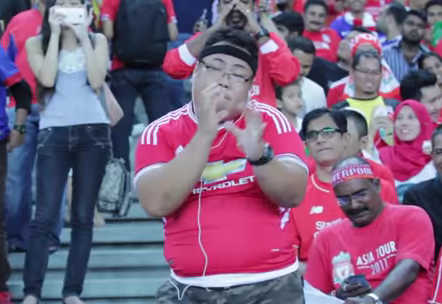 During Liverpool’s pre-season 1-1 draw with a Malaysia XI in Kuala Lumpar, one brave Manchester United fan decided to wind up the Reds’ crowd with a slammin’ dance routine.

Eventually, a Liverpool fan gets him to sit down and wear a Malaysian scarf. However, by that stage, the United fan, wearing the club’s new jersey, had made his funky point. One wonders what music he was dancing to? Probably the Beatles after all.

Surely the Red Devils should sign this genius troll up as an Old Trafford mascot right away?