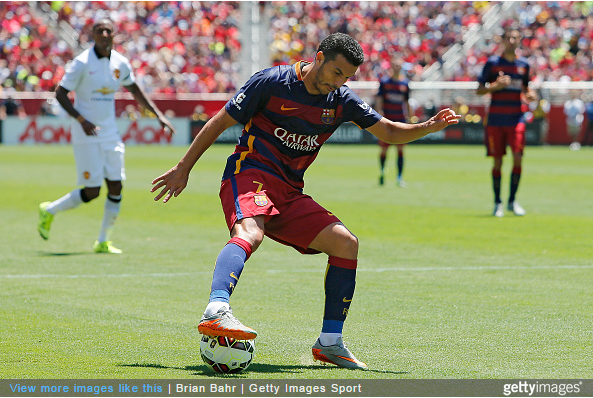 Pedro’s move to Manchester United may not be as cut and dried as first thought, with the Mirror claiming that the Red Devils are unwilling pay the £23million wanted by Barcelona. Indeed, United are apparently yet to register a formal bid for the Spanish winger.

Louis van Gaal aren’t too keen on meeting Barca’s evaluation of the 28-year-old, who’ll have a lower resale value if and when he would move on from United. The club are hoping to get their man for closer to £17million although it does still seem likely a deal will eventually be done.

Everton And Tottenham Hot For Honda

The Express tells us that Japanese schemer Keisuke Honda could be on his way to the Premier League, with both Everton and Spurs eyeing the Milan man. Apparently Honda is not too happy with new boss Sinisa Mihajlovic’s tough training regime while the 29-year-old is in no way guaranteed a place in the new look Rossoneri’s starting 11 in the coming season.

A gifted, if inconsistent, playmaker, Honda would add a bit of magic to both the Toffees and the Lilywhites, although whether he’d adapt to England’s tough top-tier remains to be seen.

Man Utd Still In For Ramos

The Independent reports that Manchester United may still be in with a shout for Sergio Ramos. The Real Madrid defender was expected to seal a new improved deal with the La Liga giants after being linked with a move to Old Trafford. However, it seems that Los Merengues are reluctant to meet Ramos’s £135,000 per week wage demands.

The Red Devils would be willing to pay the temperamental star that kind of money but it still looks more likely that the 29-year-old will eventually sign on the dotted line at the Benabeu.

Tim Sherwood is eager to team up once again with winger Aaron Lennon, according to the Sun. The two worked together at Tottenham and now Aston Villa bos Sherwood is eager to bring the 28-year-old to Villa Park. Lennon enjoyed a good loan spell at Everton last season and had been expected to move permanently to Goodison Park. However, with the Villans offering £5million for the speedster, he could be on his way to the midlands.

Lennon finds himself well done the pecking order at White Hart Lane, so a move to Villa and Sherwood could kickstart his career.

De Bruyne Has One Eye On The Exit

Kevin De Bruyne may yet move to Manchester City, according to the Mirror, after hinting that his future may lie away from Wolfsburg. On the current uncertainty surrounding his future, the Belgian playmaker said “I’m not one who says that I’m staying here – and in two weeks I’m off. You have to be a bit open, the more I think that people know how I am I’m just trying to be honest.”

It will take around £40million to prize the 23-year-old former Chelsea man away from the Volkswagen Arena, but City certainly have the cash. So it remains very possible.