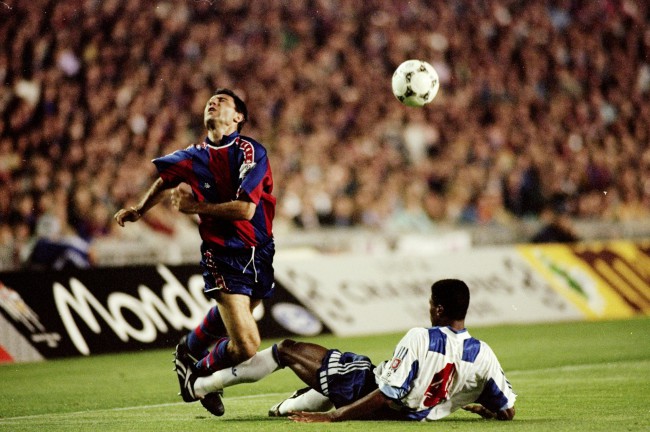 27 Apr 1994: Hristo Stoichkov (left) of Barcelona is brought down during the European Cup semi-final against FC Porto at the Camp Nou Stadium in Barcelona, Spain. Barcelona won the match 3-0. Mandatory Credit: Shaun Botterill/Allsport

Hristo Stoichkov is no fan of Manchester United manager Louis van Gaal. Bulgarian Stoichkov – most famous for scoring 118 goals in 254 appearances for Barcelona and winning the Ballon d’Or in 1994 – played under the Dutchman at the Nou Camp. It was not a happy affair. In Van Gaal’s first season at Barcelona, Stoichkov played eight times before leaving. In March 2015, Stoichkov referred to Van Gaal as “scum”.

Players suffer, because as a player Van Gaal was so mediocre. He destroys players because he was so mediocre. Look at the players who have left because of him. His first time at Barca, he destroyed them, now he has invented another one to destroy and take years to rebuild.

I would never leave if I was Pedro, never, because if he goes there he’s just another player. I wish he would listen to me and say ‘I’m staying in Barcelona’. Barca don’t need the money, no matter if it’s €20 million, €30 million or €50 million. Pedro is a symbol of Barcelona. If I’m there one day, I never sell a committed guy, with energy, who fights to be great.

It turns out he needs €200 million to spend and the other day I saw his first Premier League game. It was a disaster. United won 1-0 with an own goal and he’s content. You have to have a short memory.

Oh, come on. It’s never a disaster when you win, even if it is a scratchy affair.

Surely, you can forget the details to focus on the positives? No, you can’t:

One day, when I was injured, I was with my wife at Camp Nou and Van Gaal went up to her. He asked her how it was possible that she married someone like me. She responded that I was a Ballon d’Or winner. My departure in 1998 was the fault of Van Gaal, for sure.

Van Gaal’s moved on. But sweet Hristo seems a little stuck in the past.