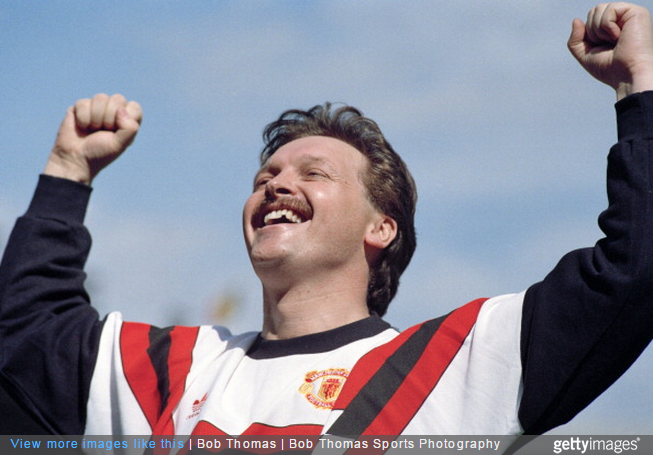 It was the biggest takeover deal in the history of British football, but the figure for which Manchester United was sold just 26 years ago wouldn’t even buy a first-team regular for the side in today’s world of doolally megabucks.

The club had been owned by Manchester meat merchants the Edwards family for 25 years, but the club needed more money than the pie-mongers could fill it with, and that’s where Isle of Man-based property tycoon and former Coventry City apprentice Michael Knighton (pictured above) came in.

Knighton talked a good game. He wanted to turn United into a global brand – imagine that! – and to plough £10million into rebuilding Old Trafford.

On the opening day of the 1989/90 season he introduced himself to Reds fans by juggling a football in the centre circle and then whacking home a goal in front of the Stretford End. The message he wanted to send was that he was a real football man™/a businessman with vision.

Knighton’s ‘stunning’ performance totally overshadowed the league debut of new £1.5million signing Neil Webb and the spiralling publicity around Knighton eventually led to his financial backers pulling out of the deal.

He never did buy the club, but eventually did buy another United – Carlisle – in 1992, after spending three years on the board at Old Trafford.

In 1991, United floated on the Stock Exchange with a valuation of £47million. In 1999, Rupert Murdoch bid £680million for the club. In 2005, the club was sold to the Glazer family for £790million – and this year’s Brand Finance report names United as the world’s first billion-dollar football brand, valuing the club at an enormous £634million.