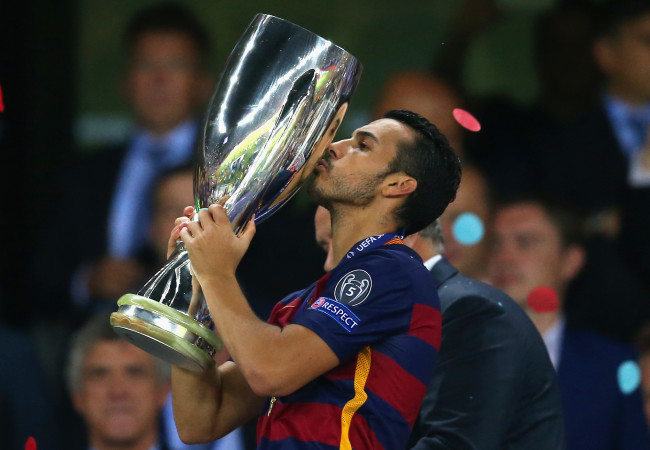 Manchester United think Pedro’s £21.3million release clause is too high, says the Daily Mail. United are ‘understood’ to have offered Barcelona £17.7million plus £3.6million in add-ons for the 28-year-old.

But does Pedro want to play at Old Trafford? He’s not sure, says the Guardian. Pedro isn’t too certain about Louis van Gaal, especially in light of the Dutchman’s falling out with his pal and former Barca teammate Victor Valdes. Pedro is said to be further confused by Van Gaal’s handling of David de Gea. Does the manager have a problem with Spaniards? That question to you, Juan Mata.

Van Gaal dropped Valdes from United’s US tour of America because the Spanish goalkeeper apparently refused to play for the reserve team last season. “He doesn’t follow my philosophy,” the Dutchman grumbled. “There is no place for someone like that.”

But the 33-year-old did make some appearances for the reserves, a fact that did not escape Valdez who took to both Twitter and Instagram to hit back at Van Gaal’s comments by providing pictorial proof of him playing for United’s reserves on multiple occasions last season.

And then there was Van Gaal’s questionable decision to go public regarding David De Gea.

Said Van Gaal: “We talked with him [De Gea] and he fully agreed with our decision. Frans Hoek [United’s goalkeeping coach] – he has a meeting with David de Gea and he asked him: ‘Do you want to play?’”

Asked what the response was, Van Gaal said: “‘No.’ Then I have to take the decision.”

De Gea’s pals then told media that Van Gaal was wrong. The Spaniard never said he didn’t want to play.

The Indy adds that Pedro might yet stay at Barcelona, whose manager Luis Enrique, says:

We all know the situation that Pedro is experiencing. We want him to stay, but it’s a difficult decision. Nothing has changed yet, but it will change. Pedro is in a difficult situation. He’s a player who wants to stay but also wants more minutes. All the fans understand the Pedro situation.

And on it goes.