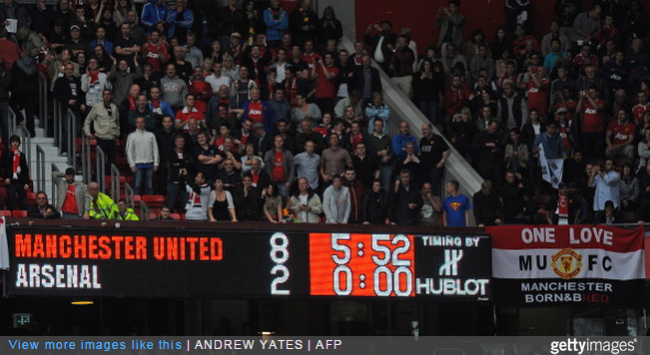 The BBC, and who are we to disagree with such an august body, called it “total humiliation”.

Arsenal were “outclassed,” left “dispirited and broken” and manager Arsene Wenger faced the “defining days of his reign” after a victory which “underscored the gulf that has opened up between United and Arsenal”.

Remember that one season when everything briefly went bonkers in the Premier League?

Earlier in the day, Manchester City had stuffed Tottenham 5-1 at White Hart Lane, but this astonishing result put the smile back on the faces of United’s fans and wiped the grins from those of the Gooners.

In front of over 74,000 fans at Old Trafford, United simply destroyed their opponents, with Wayne Rooney inspirational.

He bagged a hat-trick, Ashley Young scored a couple of uncharacteristic stunners, and Danny Welbeck, Nani and Park Ji-sung also got on the scoresheet for the home side.

Walcott and Van Persie scored for Arsenal, but the Dutchman missed a penalty and, just to put the finishing touch on a thoroughly miserable 90 minutes for the Gunners, Carl Jenkinson was sent off.

It was, said the BBC, one of the darkest days of Wenger’s career. Arsenal had not conceded eight goals in a league game since 1896 – the year that X-rays were discovered and Queen Victoria became the longest reigning monarch in British history.