A Liverpool has been awarded £4,000 after suing Greater Manchester Police over a false arrest claim.

The fan, Kieth ‘i before e’ Culvin, had been arrested after a Liverpool game at Old Trafford in 2013 for allegedly assaulting a police officer. 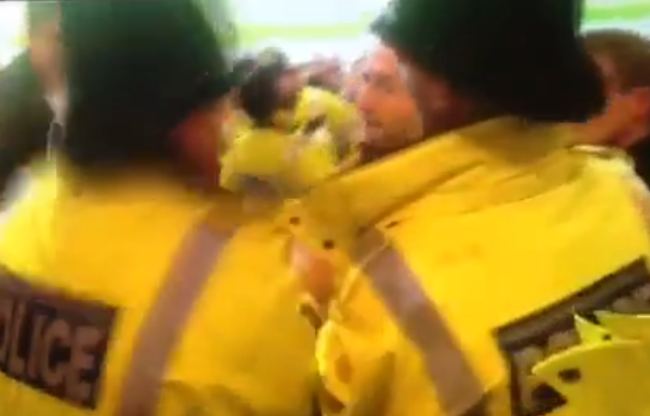 The trouble began when police officers apparently refused Liverpool fans access to the Old Trafford toilets after the game had ended.

This was despite an agreement between supporters’ group The Spirit of Shankly and the GMP that the loos would be available for Reds’ fans kept in the stadium after the final whistle.

Culvin claimed he was negotiating with the police at the time when a local copper took a tumble near him, leading the authorities to wrongfully arrest the Liverpool fan for an alleged assault.

However, the case against Culvin was eventually dropped when mobile phone footage cleared him of any wrongdoing. Here’s the footage…

Following that, the still aggrieved fan launched a legal case of his own against the GMP, culminating in the £4,000 payout.

I think the outcome vindicates myself – I did nothing wrong. My worry is that other supporters might not know they can pursue these matters further if it happens to them. I think more should, as that is the only way we will get behaviour changed and as supporters be treated properly. I’ve still continued to meet with GMP to discuss policing of supporters at Old Trafford and thankfully no other issues like this have occurred so far.

Amanda Jacks of the Football Supporters’ Federation, who supported Culvin in his legal action against the GMP, said:

What made the real difference here… was Kieth himself having the presence of mind to ask his fellow fans to use their mobile phones to film events as they unfolded.

Thankfully, Culvin’s brush with the law and subsequent legal case didn’t end going down the pan.

Let’s hope there’s no more loo-d behaviour from the police or anyone else, when United clash with Liverpool this weekend.