Returning to the Champions League after a year out, Manchester United couldn’t start their new Euro campaign with a win, instead losing 2-1 to an impressive PSV Eindhoven side, with an horrific injury to Luke Shaw adding to the misery for the Red Devils. 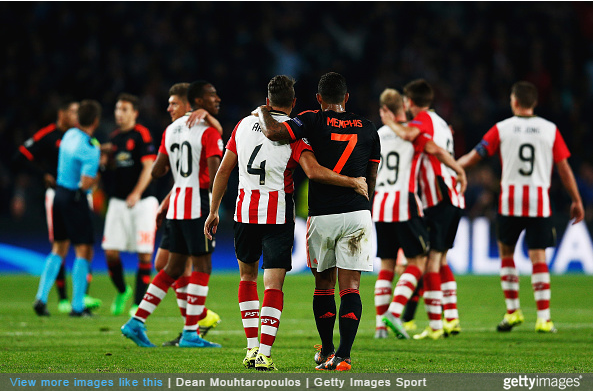 With only 15 minutes of the game gone, full-back Shaw was tackled in his own box by Hector Moreno. The heavy challenge left the England youngster needing prolonged attention before being stretchered off. With a double leg fracture the prognosis, the defender, who has impressed this season, now faces a lengthy recovery.

The opening goal eventually came just before the break, with Depay waltzing through the hosts’ defence before firing home.

Memphis Depay gives Manchester United the lead on his return to PSV. pic.twitter.com/fRQKPsdDjf

Just before the break, PSV got back on level terms, with none other than Moreno himself netting the equaliser, with the ball deflecting in off Daley Blind.

On 57 minutes, the home side’s comeback was complete, when Luciano Narsingh headed home after some lax defending from the Red Devils.

United had chances to get themselves back into the game, with Depay failing to convert a number of decent opportunities.

Juan Mata then miscontrolled a Bastian Schweinsteiger pass when the Spaniard really should have scored but ultimately the Mancunians would start their Champions League with a defeat.

Louis van Gaal will no doubt be pleased by the number of chances his team created. However, that all-important cutting edge needs to be sharpened if they are to make their mark in Europe once again.