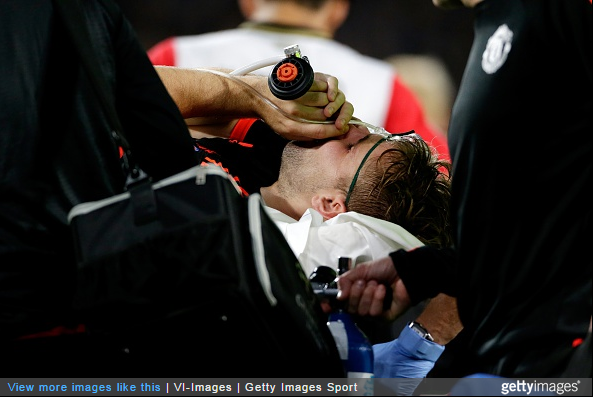 Good will from around the world has been pouring in for Luke Shaw after the Manchester United full-back suffered a particularly gruesome double leg fracture just 20 minutes into last night’s Champions League opener against PSV.

Among Shaw’s many well-wishers was the man whose tackle resulted in the United man splintering his tibia and fibia in one fell swoop, PSV defender Hector Moreno – who also suffered a broken leg while playing for Mexico during last summer’s World Cup…

First of all I wanna send my strenght to @LukeShaw23 I’ve been through this before and I know how it feels.. So I hope a fast recovery 1/2

Juan Mata also posted the following message on Instagram, along with a photo of Shaw looking like a big daft, soppy dog…

I go now to bed, frustrated and dissapointed about the result of the game. But soon, it will be another game and we'll put everything to win again. That's this sport… But now i'm very gutted for this man… That's the @lukeshaw23 i know. You are always smiling, my friend. Keep doing that, be strong and think positive. We all want you to come back soon, we will miss you for some time, but we will still enjoy in this season with your football, Luke.

Several hours after being stretchered off the pitch in Eindhoven, Shaw himself managed to reply while presumably doped up to the eyeballs in a hospital bed…

Thank you everyone for your messages , words can’t describe how gutted I am , my road to recovery starts now, I will come back stronger.

Here’s wishing him all the best.