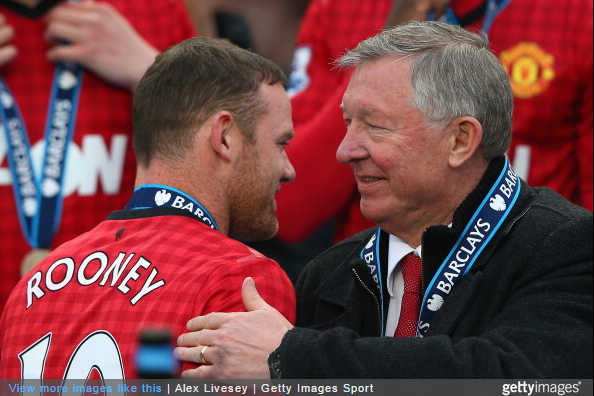 With another book to plug, Sir Alex Ferguson has been all over the shop of late.

Indeed, the former Manchester United overlord has been dropping quote bombs left, right and centre, shedding a few more slivers of light on his long and storied stint at Old Trafford.

Writing in his latest tome, simply entitled ‘Leading’, Ferguson has revealed how he attempted to nix Wayne Rooney’s humongous pay increase when the striker threw a contract wobbly in 2010.

Rooney was fixing to leave Old Trafford before he was coaxed back into the fold with a massive £250,000-a-week contract – not that Fergie was on board with the yawning pay deficit between himself and his top-earning player.

I told them I did not think it fair that Rooney should earn twice what I made.

[United co-chairman] Joel Glazer said: ‘I totally agree but what should we do?’ It was simple.

We just agreed no player should be paid more than me.

While doing the press rounds to promote the book’s launch, Ferguson has furnished us with a few other choice revelations.

Here are but a few of the more interesting ones…

We had Paul under a three-year contract, and it had a one-year renewal option which we were eager to sign.

His agent Mino Raiola suddenly appeared on the scene and our first meeting was a fiasco. He and I were like oil and water.

From then our goose was cooked because Raiola had been able to integrate himself with Paul and his family and the player signed with Juventus.

On only ever having four players he considered to be world class at United:

Paul Scholes, Eric Cantona, Cristiano Ronaldo and Ryan Giggs. They made the difference and the evidence is there.

On Giggsy as a future manager:

Ryan is eventually going to be a great manager – he has intelligence, presence and knowledge.

Had he retired in his mid-thirties, rather than when he was 40, there is every chance that he would have been my assistant in my final five years at United.

For a manager, no matter the result, at a press conference you need to come out as the winner.

You can kill yourself in a press conference… it’s an important part of your job.

I love [Van Gaal’s] press conferences, I mean they are brilliant. I can see some of the press guys twitch in their seats when he answers some of the questions. And he’s got the confidence to deal with that.

On the Chelsea player that annoyed him most:

Little Gianfranco Zola, he annoyed me. He was one of these players who was unperturbed about who he was playing against.

How can he be enjoying himself playing against United? Nobody else does. He was a fantastic player and I loved watching him.

He’s a better player than I thought he was. He’s a clever little bugger.

It was enjoyable (to watch) and for me to say that about an opponent tells you how much I admired him.

On his infamous temper:

I didn’t need to lose my temper as much (as I got older). When I was young I was ferocious. I just wanted to rule the world so my anger would be obvious.

On the Cuban Missile crisis:

JFK had his own convictions about the state of affairs regarding the Cuban crisis. All his generals wanted him to bomb Cuba out of existence.

He wouldn’t take that advice and stood by his conviction there was a solution to the problem. It was a bit like Russian roulette and who was going to blink first.

He continued down that path and it certainly worked.

Huzzah for JFK and the strength of his convictions!