Arsenal produced a superb first-half attacking performance to blitz Manchester United in a comfortable and deserved 3-0 win at the Emirates. 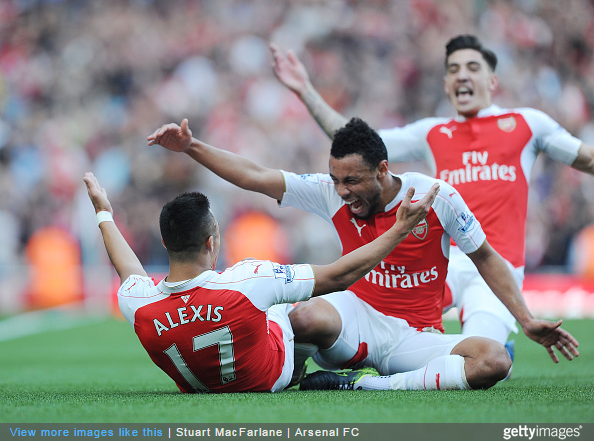 With Petr Cech back between the sticks, the Gunners started brightly and went 1-0 up after just six minutes, with Alexis Sanchez producing a fine flicked effort from a Mesut Ozil pass.

Just 74 seconds later, the Gunners were 2-0 up, with Theo Walcott setting up Ozil who placed his finish superbly.

United were all over the shop at the back, with Daley Blind struggling against the pace and movement of Sanchez and Walcott. On 19 minutes, the third and final goal of the game came, with Sanchez getting the better of Matteo Darmian before unleashing a rocket into the top-corner of David De Gea’s goal.

A brilliant strike by Alexis from the edge of the box. pic.twitter.com/ILv0XH3rzl — BPL Zone (@BPLZone) October 4, 2015

Aaron Ramsey then had a great chance to make it 4-0, only for the Welshman to volley wide.

Just before the break, the Red Devils finally clicked in attack, with Anthony Martial forcing a fine save from Cech.

At the break, Louis van Gaal hauled off Darmian and Memphis Depay, bringing on Antonio Valencia and Marouane Fellaini.

The visitors did improve in the second 45, as the Gunners sat back on their three-goal advantage, with Bastian Schweinsteiger thwarted by Cech when through on goal.

Late on, sub Alex Oxlade-Chamberlain hit the frame of the goal courtesy of a clever chip.

Ultimately, the game would end in a deserved win for Arsenal, who bounced back after that midweek disaster against Olympiakos. Arsene Wenger’s men go second in the table, level on points with United and just two points behind leaders Man City. As for Van Gaal, he’ll no doubt be concerned by the brittle nature of his side in the first-half.