Manchester United produced a convincing performance at Goodison Park on Saturday, with the Red Devils registering a deserved 3-0 win. 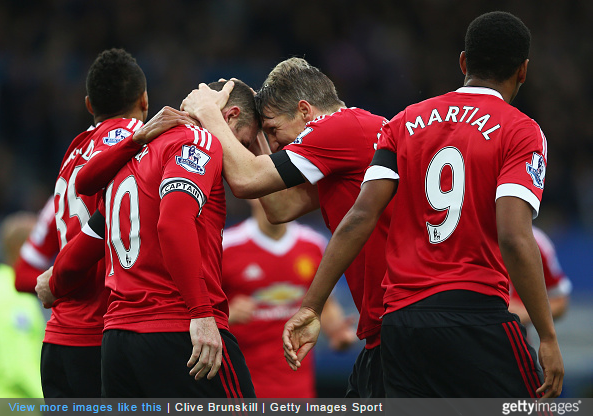 The day saw the passing of Everton’s legendary manager Howard Kendall at the age of just 69, a man who oversaw the club’s most successful title-winning period in the 1980s.

After starting slowly against Arsenal in their 3-0 defeat at the Emirates last time out, United were eager to begin the game strongly, and they went ahead after 22 minutes, with Morgan Schneiderlin firing home.

The Frenchman impressed throughout while fellow-midfielder Ander Herrera flourished in an advanced role. Indeed, within four minutes of the opening goal, the Red Devils were 2-0 up with Herrera heading home from a pinpoint Marcos Rojo centre.

After the break, Everton improved, with both Romelu Lukaku and Ross Barkley both going close.

However, it was the visitors who would score the third and final goal of the game, with captain Wayne Rooney scoring just after the hour-mark.

Former-Toffee Rooney had a chance to net a second goal, only to muster a weak effort at Tim Howard in the Everton goal.

Overall, Louis van Gaal’s side were well worth the three points while Roberto Martinez will be concerned by his side’s disappointing display.