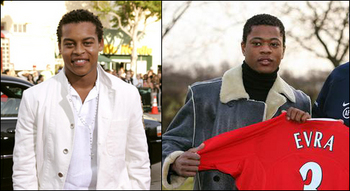 A thousand thank-yous to Pies reader Scott, who emailed us this splendid shit lookalike – in case you don’t know, Robert Ri’chard (nice apostrophe placement Robert) is a 24-year-old American actor, who has appeared in lots of TV shows (CSI: Miami, Veronica Mars etc.) and the odd shit movie (House of Wax and Coach Carter to name just two). Patrice Evra has never appeared in any episodes of CSI, as far as we know.