Championship side Middlesbrough produced a Wednesday night shock in the Capital One Cup, dumping the mighty Manchester United out of the competition at Old Trafford after a penalty shoot-out. 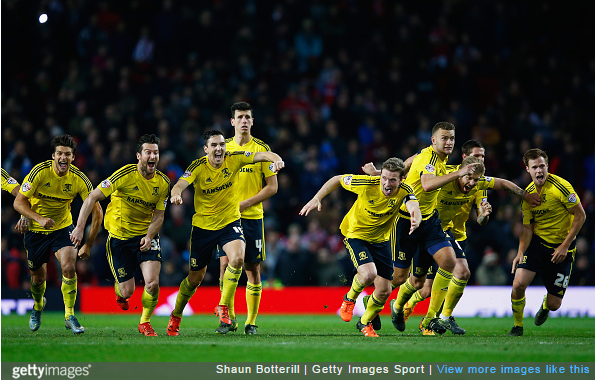 Aitor Karanka’s Boro’ were well-organised throughout the game, as the hosts struggled to find an end product.

On the 10-minute mark, the travelling supporting shone their mobile phones in a show of support for the steel workers in the north-east.

James Wilson, starting in place of Wayne Rooney, struggled to impose himself on the game in the first-half against a solid Boro’ backline.

At the start of the second-half, Louis van Gaal sent on Wayne Rooney for Wilson, although once again the United captain struggled to provide the requisite cutting-edge up front.

Late on  youngster Jesse Lingard almost won the game for the Red Devils, seeing his effort come off the post.

Up the other end of the pitch, Stewart Downing then almost secured a win in normal time for the visitors, with his powerful drive kept out by Sergio Romero.

In extra-time, the Red Devils pushed for the winner, with Andreas Pereira, Anthony Martial and Marouane Fellaini all going close.

However, in the endit would take a shoot-out to decide the tie. England internationals Rooney, Michael Carrick and Ashley Young all missed in front of their home fans (only Pereira scored for the hosts), with Grant Leadbitter, Downing and Ben Gibson’s successful spot-kicks securing a famous win for the Championship side.

While the League Cup won’t have been at the top of Van Gaal’s list of priorities, a home defeat to a lower league side along with another disappointing display by Rooney will no doubt concern the Dutchman. As for Karanka and co., they can look forward to a quarter-final clash with Everton.