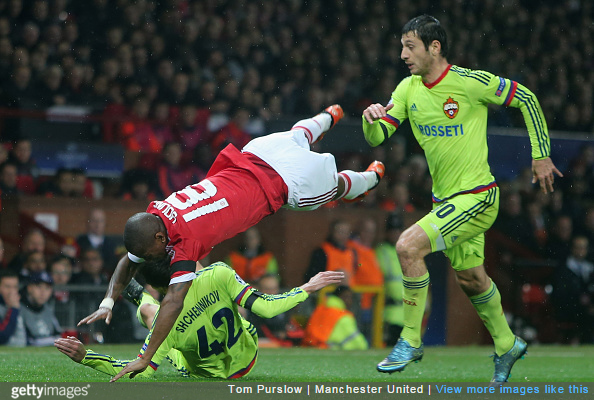 There are few more pathetic sights in modern football than an Ashley Young dive; the stoop, the twist, the dainty flick of the heels above the head, the flail, the shoulder roll, the crash landing, the wail of faux agony, lather, rinse, repeat.

While he’s hardly alone in his penchant for a-rollin’ and a-tumblin’ with gay abandon, Young has fine-tuned his unmistakable technique down to an art.

However, while punditing on the game as part of ITV’s highlights show, former Manchester United captain Roy Keane went in hard on Young after being confronted with footage of the winger’s latest feeble attempt to con a penalty against CSKA Moscow on Tuesday evening.

In fact, Keane went for the jugular:

I think the guy’s a disgrace. If he’s a Manchester United player then I’m a Chinaman.

Absolute disgrace. He’s done it [dived] far too many times.

Look at that [dive] — absolute disgrace and I just hope players are getting hold of him, whether it be the manager or some of the senior players.

That shouldn’t be accepted at Manchester United. Absolutely disgraceful.

You can maybe do it once or twice and make the mistake, but he’s done it nine or 10 times and at his previous clubs.

While we’re not entirely sure about his slightly iffy deployment of the word ‘Chinaman’, we’re glad to see an ex-pro being genuinely appalled by the continuous stream of diving that pollutes almost every single match at the moment – especially in the Champions/Europa League.