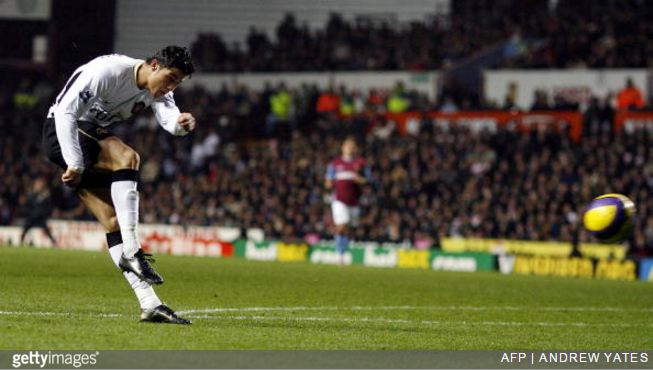 For almost an hour, Manchester United had found it hard to break Aston Villa down at Villa Park on this day back in December of 2006.

With Park Ji-Sung and Louis Saha deployed up front alongside Cristiano Ronaldo, the stodgy 4-3-3 formation manager Alex Ferguson had opted for looked not to be working and he was preparing to bring Wayne Rooney on when the breakthrough came.

Then, on 58 minutes, Ronaldo hurtled 40 yards with the ball at his feet and unleashed a shot in the direction of the Villa goal. The effort was snuffed out almost at source by defender Gary Cahill, but the ball bobbled straight back to Ronaldo who made no mistake with his second effort.

It was the 2,000th goal that United had scored under Sir Alex Ferguson, and it proved significant. United ran out 3-0 winners thanks to another goal from Ronaldo and one more from Paul Scholes.

The win meant the Reds topped the table at Christmas, something footballing sage Jose Mourinho had confidently predicted would not happen before the game.

United remained top for the rest of the season. Mourinho’s Chelsea remained second.