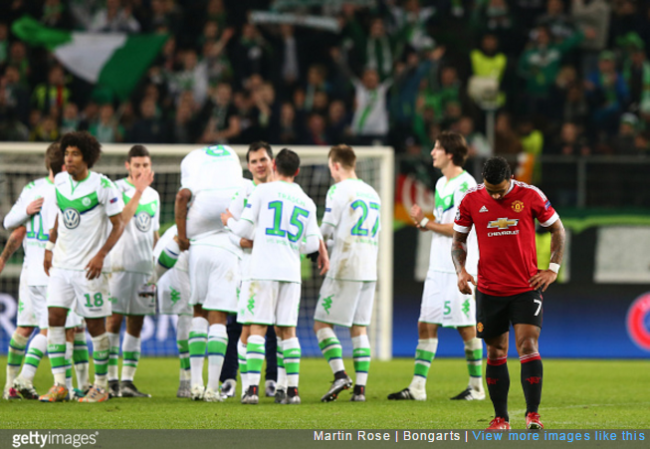 Despite being all but through with eight minutes left on the clock, a late header from Naldo resigned Manchester United to a 3-2 defeat against Wolfsburg in their final Champions League group game and ergo a new life in the Europa League.

Condemnation has been rife ever since the final whistle rang around the Volkswagen Arena to seal United’s fate, with ex-players and fans alike taking the opportunity to voice their embarrassment, their displeasure and, in some altogether more melodramatic corners, their wont to see Louis van Gaal do the decent thing and resign his post.

That said, the man himself has decided to adopt a defiant stance, claiming that despite crashing out of the Champions League at the first hurdle and being bumped out of the Capital One Cup by Middlesbrough in the fourth round so far this year, the 2015/16 campaign has actually been an improvement on last year’s efforts.

Speaking to the press directly after the Wolfsburg game, Van Gaal declared:

The facts say we are better than last year. I’m also disappointed that we are out of the Champions League.

To be fair, United went out of the League Cup to Boro on penalties. They were thrashed 4-0 by MK Dons at the fourth round stage last season. That’s definitely an improvement.

We find it fairly amusing that having to slum it in the Europa League has come to be seen as the ultimate indignity for bigger, snobbier clubs.

UEFA’s secondary, knock-down bargain basement competition truly has no prestige at this point. Too many no-mark teams from the back of beyond. Too many games. Clubs fobbing it off with second-string team selections. Champions League detritus being dumped in half-way through the tournament. It’s hardly a winning recipe.

Here’s a question: Would United fans rather have their team win the Europa League this season or have watched them go out in the quarter-finals of the Champions League?