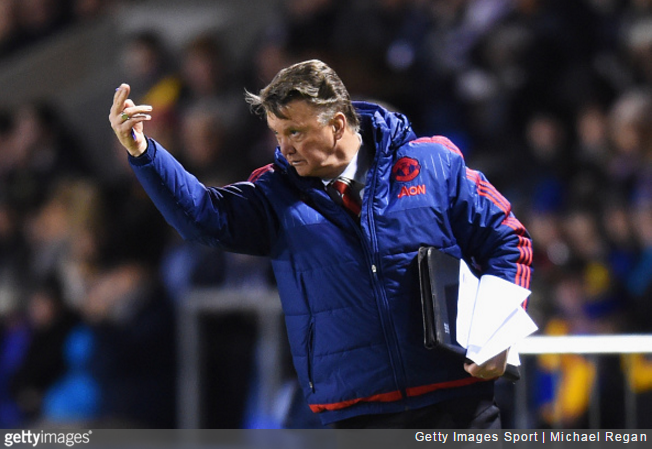 Manchester United rumbled to a 3-0 win over Shrewsbury Town in the fifth round of the FA Cup last night.

Following on from Chris Smalling’s opener, Juan Mata put the away side 2-0 up shortly before the break with a slightly controversial free-kick – controversial because the three men in United’s ‘dummy wall’ appeared to be several fathoms offside as they attempted to obstruct the view of goalkeeper Jayson Leutwiler.

Despite the trio being clearly offside, interfering with play *and* seeking to gain an advantage while doing so, the goal was allowed to stand…

Louis van Gaal was pressed about the routine after the match, with the Dutchman revealing that he’d pinched the play from United’s Europa League opponents, FC Midtjylland.

Van Gaal claimed he’d stumbled across the routine while preparing his pre-match analysis of Midtjylland and had too assumed it was against the rules of the game.

However, the officials who took charge of United’s 2-1 defeat against the Danish side duly confirmed to him that the free-kick was perfectly permissible.

We have learned because we have analysed Midtjylland. We have seen that they are doing that and we thought that it was offside.

So we have asked the referees, from that game, the Portuguese referees, and they said ‘no, it’s not offside, you can do that.

So that’s why we have learnt from Midtjylland and today we have scored, so that’s good.

Fair enough. That’s how we learn, isn’t it?