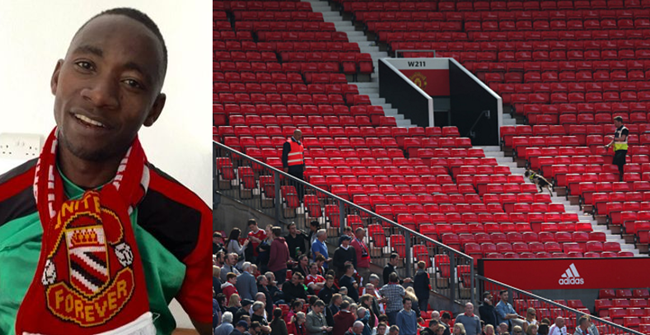 The dud-bomb palaver that enveloped Old Trafford yesterday thankfully proved to be little more than an inconvenience for many Manchester United fans.

However, nobody inside the stadium was more put out than United fan Moses, who had travelled all the way from Sierra Leone to watch his beloved team in action live for the very first time only to have the game abandoned a few minutes before kick-off.

This is Moses. He came from Sierra Leon to watch his first match at Old Trafford. He’s distraught. pic.twitter.com/g91brx1kbe

There was, though, a happy ending to Moses’ 5,000km quandary after Manchester United Supporter’s Trust came to his aid in his hour of need.

Indeed, the United fans rallied around Moses and clubbed together to pay for the date of his return flight to be altered so he’d be able to stick around and attend the FA Cup Final at Wembley next weekend instead.

Ian Stirling, vice-chairman of the Supporter’s Trust, kept us abreast of the situation on Twitter, posting: “Update on Moses. We’re paying for a change of flight date and he’s going to Wembley!”

Above and beyond. Well played chaps and chapettes.