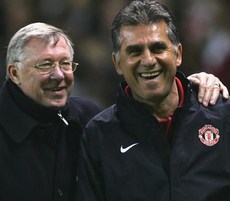 If, as seems likely after a deal was agreed ‘in principle’, Portuguese starlets Nani and Anderson move to Man Utd in the summer, United fans should really be thanking Carlos Queiroz, not Alex Ferguson. Surely it’s no coincidence that Portugal’s greatest young talent, Cristiano Ronaldo, has chosen to remain at Old Trafford, with Queiroz, when he could easily have moved to Real Madrid or Barca. It’s widely believed that Queiroz convinced Ronaldo to stay in England after the 2006 Wayne Rooney/winking World Cup incident, and that since the death of Ronaldo’s father in 2005, Queiroz has acted a father figure for the winger.
No doubt Fergie knew about the talent of Nani and Anderson – every club in Europe did – but I can’t help but feel that the presence of native Portuguese Queiroz is the clinching factor again, as it was in the Ronaldo deal. The fact that Queiroz is friends with Jorge Mendes, the agent for Ronaldo, Nani and Anderson (not a bad stable of talent, is it?) only strengthens this feeling. So United fans, don’t forget to thank Queiroz when you win the league next seasonâ€¦