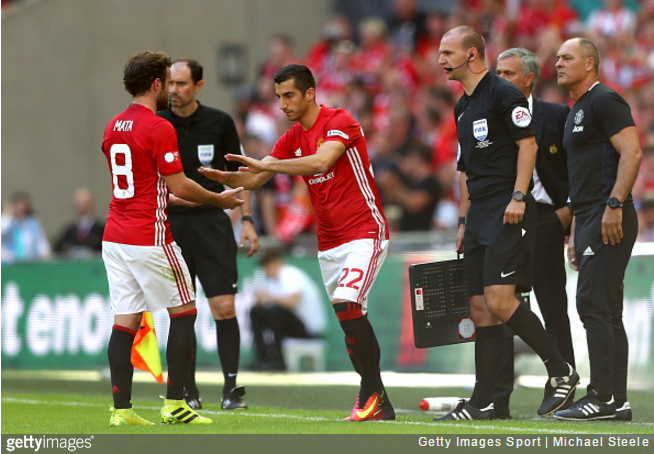 Manchester United may have come out on top in the Community Shield on Sunday afternoon but there was one bone of contention, with Juan Mata’s double substition raising plenty of quizzical eyebrows.

Of course, seeing Jose Mourinho subject Mata to the ultimate footballing ignominy played nicely into the ongoing narrative between the pair, which all began when Mourinho first dislodged and then eventually flogged Mata (to United) during his Chelsea days despite the Spanish midfielder being a double Player of the Year award winner at the time.

At Wembley, eye witness and Manchester Evening news scribe Samuel Luckhurst claimed that Mata bit back at Mourinho and had to be “restrained” as he trudged back to the bench.

For what it’s worth, Mourinho has subsequently claimed that he simply took the smallest player, which happened to be Mata, off the pitch in an effort to deal with the long throw-ins Leicester substitute Luis Hernandez started slinging into the United penalty area toward the end of the game.

Mata is 5ft 7in tall. His replacement, Henrikh Mkhitaryan, is a lofty 5ft 10in.

Mata is fine, he understands what I did. I couldn’t take Zlatan or Fellaini off because Leicester’s ‘Rory Delap’ throw-ins would win it.

The rules allow six changes, I had made five and I wanted to stop the game.

I need to take off the smallest player because we were expecting a lot of long balls. He is the smallest one.

But I think he played very well. He gave me exactly what I needed. We want to win and everyone is happy in the end.

Yes. Everyone is happy. Just look at little Juan laugh…

We honestly can’t begin to imagine what Mourinho has against the man.