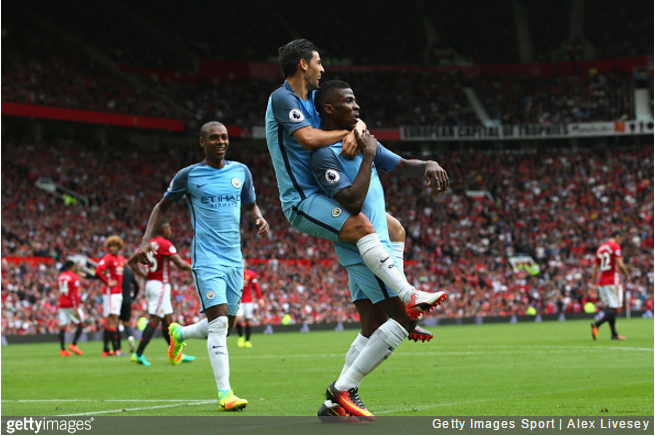 Mercifully, the first Mancunian derby of the season managed to take pass without any tedious inter-manager shenanigans, instead proving to be a rather enjoyable ding-dong of a match.

It was Man City who came out on top, winning 2-1 to bring up their half-century of derby victories, maintain their winning start to the Premier League season and extend Pep Guardiola’s statistical superiority over Jose Mourinho – the Manchester United boss having won just 3 of his 17 games against Guardiola-led teams.

City were on top from the off, looking far more drilled, determined and athletic than their languid, sluggish neighbours.

That said, it was a shock outbreak of Route One Football™ that broke the deadlock after quarter of an hour as Kevin de Bruyne sprinted onto a knock-down from Kelechi Iheanacho before slotting a surgical finish past David De Gea…

Daley Blind looking every inch the makeshift centre-half there.

Roles were then reversed as City went 2-0 up, De Bruyne’s low shot coming back off the upright to present Iheanacho with an unmissable tap-in from five yards out.

The goal was the teenage Nigerian striker’s sixth in just eight career Premier League starts to date. It also saw Iheanacho (19 years, 343 days) break Jermain Defoe’s long-standing record to become the youngest ever player to score an away goal at Old Trafford.

As if to deliberately fuel the narrative, Claudio Bravo made a few silly errors while dallying on the ball and attempting to play out under pressure.

However, it was the Chilean keeper’s flap at a deep ball into the box that presented Zlatan Ibrahimovic with the opportunity to pull one back for United just minutes before the interval.

That’s not to take anything away from the Swede’s hip-height finish though, which saw him put his industrial grade hamstrings to good use once again…

That’s four goals in four league games so far for Ibra, who is now the only player to have scored in El Clasico, the Milan derby, the Derby d’Italia, the Barcelona derby and the Manchester derby.

And to think, some folk still persist with the criticism that he falters on the big occasions.

United looked slightly more energised immediately after the restart, but City’s central midfield soon wrested back the impetus, with Fernandinho once again proving himself invaluable as he stormed around in the middle, breaking things up and setting things going all the while.

The man’s a human roadblock.

As the game wore on, Pep took off his only striker and properly clogged up his midfielder, leaving United to change their angle of approach and begin slinging the ball long as their frustration gradually increased as time wicked away.

Eventually, after the siege ran some five minutes into injury time with no meaningful chances carved out, the hammer came down and City emerged victorious.

Hardly the end of the world for Mourinho and co, but a sore defeat on home soil nonetheless.