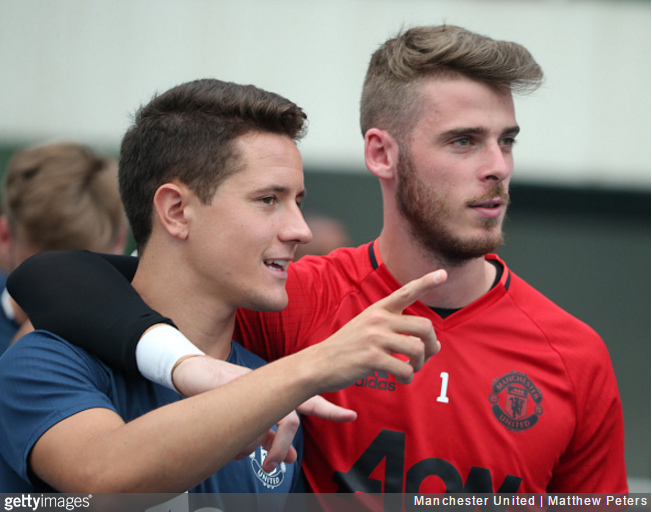 Ander Herrera has admitted that he initially assumed his “emergency call-up” into the Spain squad was merely another classic hoax from the arch mischief-maker himself, David De Gea.

Having never made a senior appearance for the Spanish national side, Herrera whisked his family away to spend international week on holiday in Madrid.

However, after injuries to both Thaigo Alcantara and Saul Niguez left his squad looking a little thin in the middle, coach Julen Lopetegui decided to call the 27-year-old into the fold for the first time.

Sadly, Lopetegui left De Gea to deliver the message to his United teammate over the phone, rendering it instantly dismissed.

I was in Madrid, staying at a hotel in Paseo del Prado for a couple of days with my daughter and my girlfriend to enjoy the city and climate, which we missed a little bit [in Manchester].

David de Gea called me unexpectedly and I thought he was calling me for something else.

He said, ‘Come over here.’ ‘Here? But where’s here?’ I replied. I didn’t realise at that moment. ‘Lopetegui told me that you will come with us.’

I thought it was a joke, and even asked him if it was.

I packed my suitcase really quickly, and then Lopetegui called me. I took a taxi to come to the Spain training centre as soon as possible as I didn’t want him to turn to another player who could come sooner than me!

Indeed, it would appear that Herrera packed his case a little too quickly, with El Confidencial reporting that he had to be granted special permission to leave the Spain training camp to buy himself a new pair of boots after forgetting to bring his own.

As debut call-ups go, all the omens have certainly been on the ‘inauspicious’ side so far.