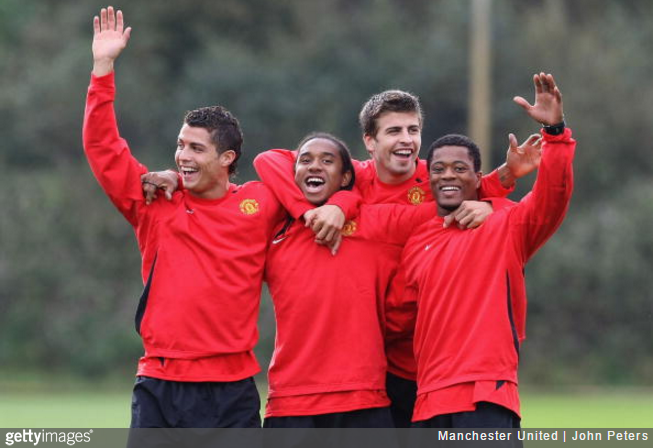 More from Gerard Pique now, with the Barcelona defender’s fond memories of the time and effort he used to devote to  pranking his chums in his younger years.

As part of his all-encompassing interview with Catalan broadcasters TV3, Pique was asked what he misses most about his time at Manchester United.

The answer, it would appear, is being able to psychologically and emotionally torture poor Patrice Evra on a daily basis.

I’m a big fan of British humour. It was what I loved about Manchester. They don’t get offended when you play tricks on them. They try to get you back, but they don’t complain.

One day Patrice Evra came in with shoes that he’d been asking Nike for months to make. They had the name of his children on them and all these crazy details.

He went into the shower and we created a small bonfire and burned them. We recorded it and then sent him the video.

Oh yes, that vaunted old staple of British comedy – the classic ‘burn your friend’s personal effects in front of his eyes’ caper.

Unfortunately for Pique, the particularly potent strain of practical humour he successfully cultivated in England didn’t really translate after his big move back to Barca.

Here at Barca, my humour hasn’t always been appreciated by everyone. I deflate teammates tires and other things, but this is nothing compared to what happened at United.

In the first few years here, I tried similar things but it didn’t work. It’s not the same culture.

At United, they would take an expensive shirt that you have bought and put it on the free-kick mannequins. The shirt would be ruined because of all the mud it would get on it every time the ball hit it.

It was a dressing room full of life.

Guess that’s one way of putting it.