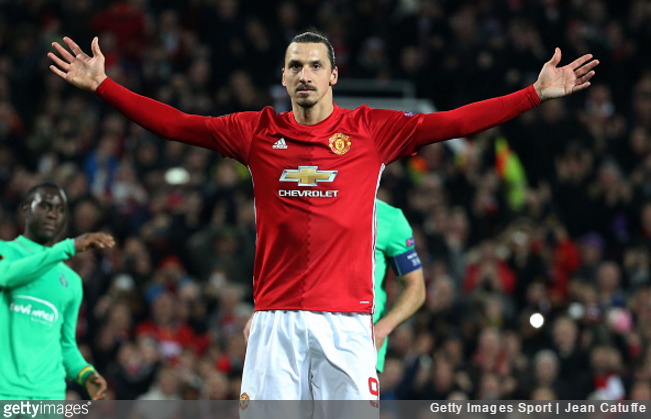 A Zlatan Ibrahimovic hat-trick helped Manchester United to a comfortable 3-0 win at home to Saint Etienne on Thursday night.

The 35-year-old veteran has enjoyed superb maiden season with United and opened the scoring on 15 minutes, courtesy of a heavily deflected free-kick which caught out goalkeeper Stephane Ruffier.

Saint Etienne, with Florentin Pogba facing his brother Paul, were a threat in the first-half, with both Henri Saivet and Nolan Roux going close.

The Red Devils’ second goal finally came on 75 minutes, with Ibrahimovic tapping in from close-range after good work from Marcus Rashford.

Then, on 88 minutes, the Swedish superstar bagged his hat-trick, courtesy of a penalty kick after a feather-light shunt sent him tumbling over in the Saint Etienne box.

United could have added to their tally, with Juan Mata, Anthony Martial and Paul Pogba all going close.

However, in the end Jose Mourinho’s lot were deserving winners, taking a healthy three-goal advantage into the second leg.

As for Ibrahimovic, the Swedish superstar has now netted a superb 23 goals this season for the Red Devils – while taking his career tally against Saint Etienne to an incredible 17 goals.

No doubt the French side will be delighted to see the back of Ibrahimovic, albeit after the return leg next week.