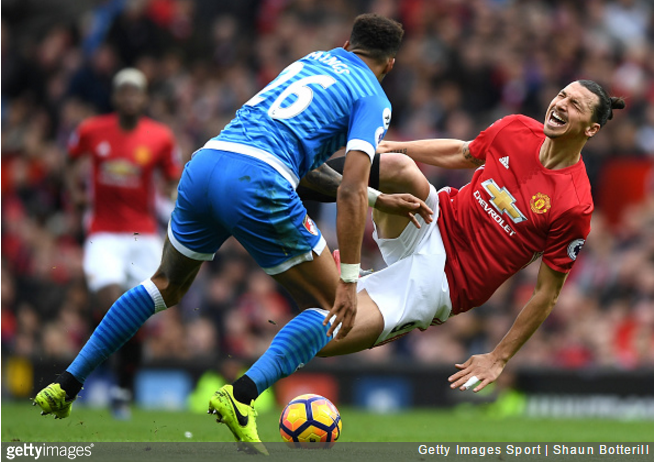 Tyrone Mings has been handed a five-match ban by the FA for tussling with Zlatan Ibrahimovic during the 1-1 draw between Manchester United and Bournemouth on Saturday.

The pair were both charged with violent conduct after Mings raked his studs across Ibrahimovic’s head before taking an elbow to the cheekbone from the Swede by way of recompense.

After metering out the charges, the FA did mention Mings was liable to serve a longer suspension as their standard sanction would be “clearly insufficient” punishment for his particular transgression.

Mings was charged with violent conduct in relation to an incident in or around the 44th minute of the game against Manchester United.

“In or around the 44th minute”? Give over chaps, you know exactly when it was. Let’s not be daft.

Ibrahimovic, for the record, was given a three-match ban yesterday, with Bournemouth left to deride the discrepancy in the FA’s judgement as “extremely disappointing” in a statement issued on their club website.

Given that both players thrashed seven shades out of each other, we’re inclined to agree.