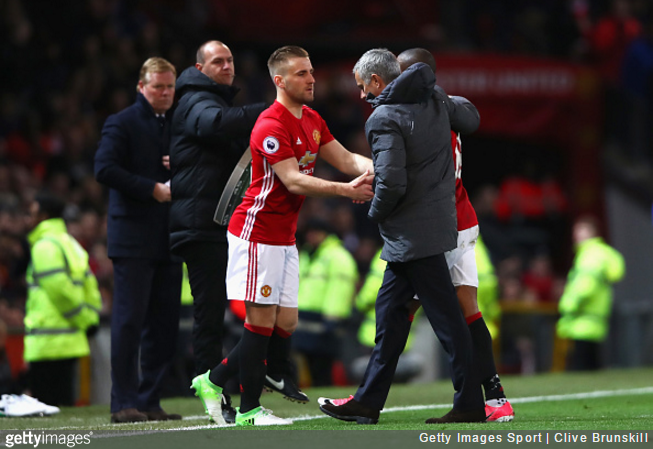 Despite his manager’s insistence that he wasn’t even ready for a spot on the bench, Luke Shaw did eventually feature for Manchester United in their 1-1 draw against Everton on Tuesday night.

Making only his second appearance since January, Shaw replaced Ashley Young for the final 25 minutes as United went onto salvage a 94th-minute equaliser at Old Trafford.

Speaking after the match, Mourinho praised elements of Shaw’s cameo performance, but also took credit for guiding his replacement left-back through the remainder of the match like some kind of oversized man-marionette.

He [Shaw] was in front of me and I was making every decision for him.

We need his fantastic physical and technical qualities but he cannot play with my brain.

He must accelerate the process. 21 is old enough to have a better understanding.

He has a future here but Manchester United cannot wait.

Not overly sure if that’s a compliment or not. What Jose giveth with one hand, he taketh away with his sly spiel.

Indeed, it sounds like Mourinho is rehashing Pat Sharp’s old Fun House schtick – “Use your body and your brain if you want to play the game…”

If that doesn’t motivate Shaw, then he’s truly a lost cause.