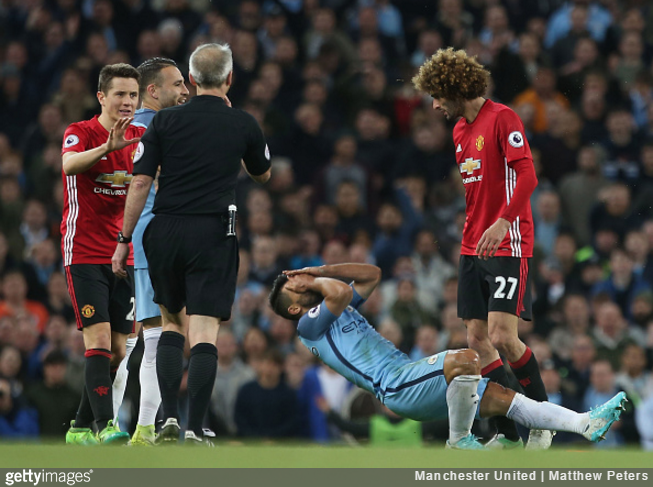 Jose Mourinho has chastised Sergio Aguero for over-egging the headbutt that saw Marouane Fellaini sent off in the latter stages of Thursday night’s borderline-unwatchable Manchester derby.

The clumsy Belgian was shown a straight red card in the 84th minute for nuzzling heads with Aguero, though the slow motion replays appeared to show that the City striker certainly made sure of it…

Speaking to the Sky Sports cameras immediately after the final whistle, Mourinho summed the incident up thus:

Then, having had a little time to digest things, the United boss reverted to default passive-aggressive mode in his post-match press conference:

So, I am not so sure. I think if Sergio doesn’t go to the floor, for sure it is not a red card. But if Marouane gave him the chance to do that… I don’t know.

What I know is we played 15 minutes with 10 men and the boys were absolutely amazing in the way they fought for the point.

He’s not entirely wrong, but still – Fellaini made two yellow card infringements in the space of 20 seconds and then head-butted somebody.

It’s hardly surprising he ended up showering 10 minutes before everybody else, now is it?