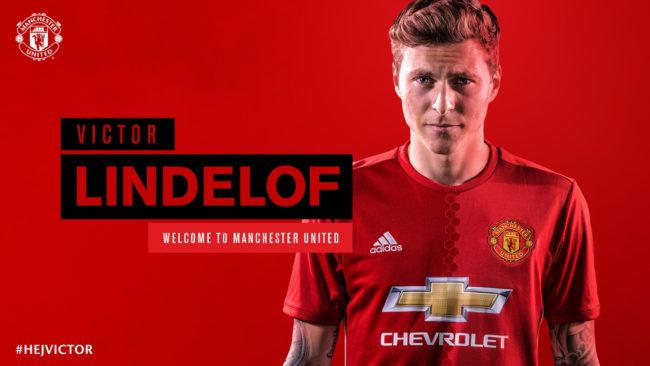 Manchester United have announced the arrival of Lictor Lindelof, with the Benfica centre-half joining the Red Devils for the princely sum of £31million.

The 22-year-old Lindelof had been linked with a move to Old Trafford earlier this month and now becomes United’s most expensive defender, beating Rio Ferdinand who cost £29million in 2002.

Lindelof has racked up 12 senior caps for Sweden and joins United on a four-year deal, with an option for a fifth.

On the completion of the deal, the Swede said:

I am thrilled to be joining Manchester United. I have enjoyed my time at Benfica enormously and I have learned a lot there. But I’m looking forward to playing in the Premier League at Old Trafford and for Jose Mourinho. I’m keen to get started and make my contribution to the team’s efforts to win more trophies.

Victor is a very talented young player, who has a great future ahead of him at United. Our season last year showed us that we need options and quality to add depth to the squad and Victor is the first to join us this summer. I know that our fantastic group of players will welcome him as one of us.

United have rather struggled to produce a consistent central defensive pairing in recent seasons, and the arrival of Lindelof will now doubt add presence to the Red Devils’ back-line.

Despite a decent first season at Old Trafford which saw him win both the Europa League and League Cup, Mourinho will be under pressure to produce a genuine title challenge next season, with another defender rumoured to be joining Lindelof at Old Trafford.

On the other hand, Chris Smalling may well move away after a patchy campaign under Mourinho.