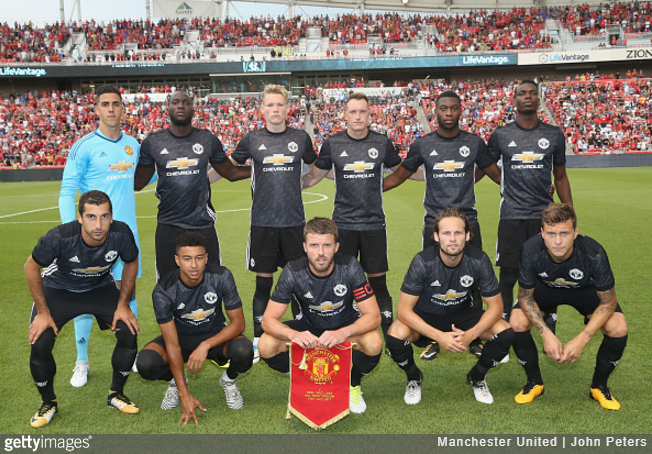 After pasting LA Galaxy at the weekend, Manchester United maintained their 100% pre-season tour record with a routine 2-1 victory over Real Salt Lake on Monday evening.

United actually fell behind in the 20th minute, only for Henrikh Mikhitaryan to restore parity eight minutes later following a burst of snappy interplay between Jesse Lingard and Romelu Lukaka on the edge of the box…

Lukaku then scored his first goal in United colours shortly before half-time, encapsulating himself in microcosm in the process.

The big Belgian collected a low Mikhitaryan cross while barrelling into the area, took an absolute clanker of a first touch, looked cumbersome while retrieving it then waltzed past the goalkeeper (who was unhelpfully tackled by his own defender) and then rolled a nice, composed finish into the back of the Salt Lake net…

Like any good film noir detective, Lukaku may not always look overly refined, but gosh-darnit does he get results.

Not that Jose Mourinho was entirely enthused after the final whistle:

The goal is nice for him (Lukaku) but not important for me.

I told him I love what he does. He assists, he moves. He holds the ball well. I like everything he does.

As for the remainder of the match, the second half saw no further goals, though United were relieved of a player in the 68th minute when Antonio Valencia was shown a straight red for this…

The swipe was a little unnecessary of Valencia’s part, but a straight red? Soft as you like.

Mourinho later claimed he was offered the chance to sub off Valencia several minutes before his dismissal, after referee Allen Chapman noticed that relations between the Ecuadorian right-back and his opposing winger, Sebastian Saucedo, were beginning to get a little fraught.

The referee asked me to change the player and I didn’t because I don’t agree with the card because Saucedo was really aggressive in second half. That’s what happens. Some other actions were a bit dangerous.

It’s young people with enthusiasm playing against Manchester United but it’s a friendly match and it’s a different mentality.

But it’s pre-season so no problem. It is good experience or us to play with one player less.

As for United, the bandwagon is now due to roll on and into Houston for a ‘derby’ clash against Man City at the NRG Stadium on Friday.