As you might imagine, Jose Mourinho was not a happy bunny after watching his Manchester United side get succinctly pummelled by Pep Guardiola’s Man City side in Sunday’s Mancunian derby at Old Trafford.

Indeed, Mourinho lapsed into full “celebration police” mode in the tunnel after the match, with reports suggesting the United boss became embroiled in a petty spat with City goalkeeper Ederson which soon boiled over into a full-on fracas.

As the Guardian have it, Mourinho happened across Ederson outside the City changing room door and brattishly accused the Brazilian goalkeeper of celebrating too vehemently as music blared out of the away dressing room.

The two started shouting insults at one another in Portuguese. Mourinho is said to have accused Ederson of play-acting to waste time and then reverted to English, screaming “you fucking show respect. Who are you?”

Romelu Lukaku then got involved, with eye-witnesses reportedly describing the ensuing skirmish as “reminiscent of a pub fight”, leaving Mikel Arteta, one of Guardiola’s right-hand men, with “blood streaming down his face”.

The Telegraph also add that Mourinho was “hit on the head with a plastic bottle” as well as being showered with water and milk before the Old Trafford security staff finally intervened to break up the fight.

By the sound of it, a clonk on the noggin just about serves Mourinho right – a man who only ever conducts himself with the utmost respect for his opponents, vanquished or otherwise. 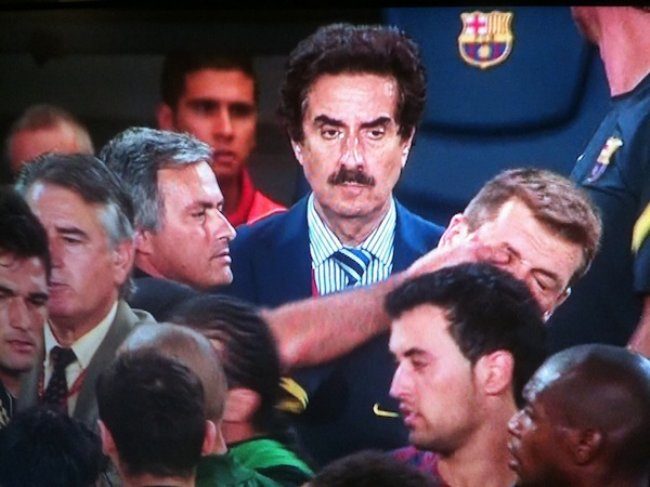 What an odd little world it must be inside that head of his.