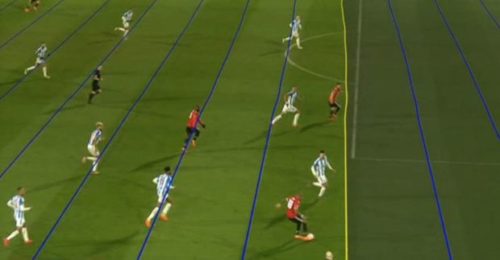 An increasingly divisive issue in football, VAR was once again the centre of attention during Manchester United’s FA Cup fifth-round 2-0 win over Huddersfield on Saturday.

The Video Assistant Referee system was used to rule on whether a Juan Mata goal just before the break should stand, with the Spaniard looking very marginally offside.

However, to the embarrassment of the officials, the images viewed by the VAR team to help them access the situation were an utter mess, full of totally useless wobbly lines which looked hand-drawn by a six-year-old and not produced by a state of the art computer system.

BT broadcast the initial images before being told that the VAR team had actually viewed were different, wobble-free images (we believe them right?).

And even VAR’s biggest fan can’t support the decision 👀 pic.twitter.com/M12VpdEUAU

What an absolute dog’s dinner!

To make matter’s worse, with the straight lines in place, Mata still looks just about level with the defender, with the decision anything but clear-cut.

Thankfully for Manchester United, the incident would have no bearing on the final result, with a Romelu Lukaku brace securing a deserved win against the Terriers, with the Red Devils moving into the quarter-finals.