Manchester United’s summer spending has kicked off in impressive style, after the club agreed a deal to buy Brazilian midfielder Fred from Shakhtar Donetsk for a reported free of £47m. 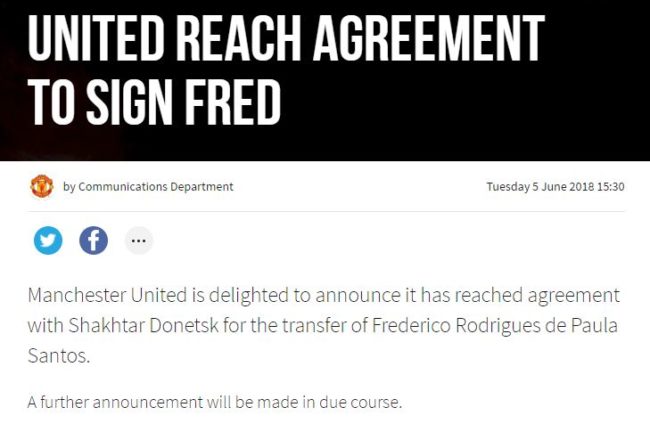 Jose Mourinho has been eager to find a midfielder able to play alongside Paul Pogba and Nemanja Matic, and in World Cup-bound Fred, the United boss has got his hands on a top-class talent.

An energetic box to box midfielder with a fine left-foot, the 25-year-old Fred has been a key cog in Shakhtar’s recent success, helping them to three league titles and three Ukrainian Cup wins.

Fred had been linked with a number of Europe’s major clubs, including Manchester City, but he is now set to move to Old Trafford, where’ll he become the seventh Brazilian to play for the Red Devils after Kleberson, Anderson, Rodrigo Possebon, Rafael Da Silva, Fabio Da Silva and Andreas Pereira.

United are also close to sealing a deal for Porto teenage Diogo Dalot, with the full-back expected to join this week.

The question remains, however, will Mourinho’s big spending really make a dent on the gulf between the Red Devils and Man City next season?