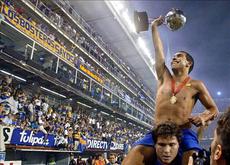 Football’s hottest rumour of the day is that Man Utd are closing in on the signing of Carlos Tevez. BBC sports editor Mihir Bose ‘understands talks are underway and says Tevez may move on loan or permanently’.
I’d love to see Tevez stay in the Premiership, and I’d imagine West Ham fans, deep down, would love to see him have another full season in England. But how damn scary would Man Yoo’s squad be with Tevez in it? Answer: scarier than The Exorcist. With Tevez and Ronaldo causing havoc on the flanks and Rooney in the middle, I wouldn’t want to be a defender going to Old Trafford any time soon.
If Tevez does sign for Man Yoo, are the champions’ title rivals playing for second?