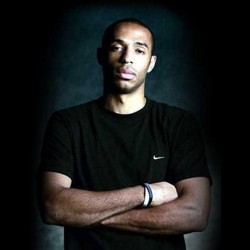 Some say nostalgia isn’t what it used to be. But now that another icon, Monsieur Henry, has left our league we took a moment to reflect on the finest overseas imports that have ever played in the Premiership.
Our all-star XI is restricted to foreign players that wowed us and then left â€“ with an attacking 4-2-3-1 formation that guarantees goals and flair.

Goalkeeper: Peter Schmeichel (Man Utd)
The Great Dane still holds the record for the best game to clean sheets ratio in the Premiership and has never really been replaced – despite the best efforts of an overweight Australian, mad Frenchman and startled Dutchman.
We’ll miss: His red nosed rage, star jump saves and even that weird Scanda-Manc accent
Centre half: Jaap Stam (Man Utd)
He may look like an escaped rock sculpture from Easter Island but that’s how central defenders are supposed to be built.
We’ll miss: Watching even Emile Heskey bounce off him and his misguided writing skills
Centre half: Marcel Desailly (Chelsea)
The Frenchman proved that old-Chelsea wasn’t just a retirement home for ageing Serie A pros with some committed displays towards the end of his career â€“ someone should’ve told Shevchenko
We’ll miss: His clairvoyant sense of positioning and wondering why he always looks like he’s about to piss himself laughing during interviews
Left back: Dennis Irwin (Man Utd)
Another player from United’s treble winning team and the blueprint ‘Mr. Dependable’ – like a less opinionated Gary Neville
We’ll miss: Bending it better than Beckham with his free-kicks and trying to recall if we’ve ever heard him speak
Right back: Gary Kelly (Leeds)
Controversial but you try racking your brain for a right back â€“ and at least Kelly was another model of Irish consistency who stayed with Leeds through thick, thin and anorexic
We’ll miss: Trying to work out if that was Kelly, Gary Speed or Ian Harte on the ball
Central midfield: Patrick Viera (Arsenal)
When every new black player with a lanky gait and bone crunching tackle is instantly hailed as the ‘new Viera’ you realise how few people must have actually seen the original, and still the best.
We’ll miss: His Clash of the Titans confrontations with Roy Keane, especially if it’s about scaring poor little Gary Neville
Central midfield: Roy Keane (Man Utd)
Just reading his name alongside Viera on the team sheet would be enough to provoke a change of pants for any opposition. One glare from Keano would be enough to make this entire team play better – just don’t give him reason to hold a grudge, Alfe
We’ll miss: The look of total fear in referee Andy D’Urso’s face when just inches away from a vein throbbing Keane tirade
Right forward: Gianfranco Zola (Chelsea)
A real winger might have given more balance but you can’t leave out the horse faced Italian who turned out to be a thoroughbred. Zola was revered as much for his mesmerising skills as he was for being an all round bloody nice bloke
We’ll miss: His youthful enthusiasm despite being old enough to father half the team and those flicked goals
Left forward: Thierry Henry (Arsenal)
Not his natural position but the dearly departed French maestro is often found lurking on the left – usually just before breaking the sound barrier. Probably the best player ever to grace the Premiershipâ€¦and certainly holder the most irritating goal celebrations
We’ll miss: The gliding movement, the goals and even those Clio advertsâ€¦or maybe not
In the hole: Eric Cantona (Man Utd)
The catalyst that sparked United’s resurgence and still the King of Old Trafford. He excited the fans, inspired the youngsters and was even good enough to get a rare second chance from Fergie
We’ll miss: The upturned collar, puffed out chest, confusing poetry and kung fu chav-bashing
Striker: Dennis Bergkamp (Arsenal)
Not in the mould of a van Nistelrooy style centre forward but we prefer total football to goal poaching. Bergkamp changed players’ attitudes to lifestyle and brought back technique – but he was still the only member of the A team that, “Ain’t getting’ on no plane, fool”
We’ll miss: The moment time seemed to stand still as he flicked the ball and spun around Niko Dabizaz to score against Newcastle