It doesn’t take a genius to draw the conclusion that Manchester United weren’t very good at the weekend as Jose Mourinho’s stagnant troupe fell to a 3-1 defeat against Jurgen Klopp’s rampant Liverpool side.

However, should any confusion still linger, there is always one infallible barometer to fall back on when it comes to just how dismal United played.

When Juan Mata respectfully refuses to write a post-match blog, you know it was bad. Indeed, the last time the Spanish forward put his musings on hold was in the aftermath of United’s rank 3-1 defeat against West Ham in September.

With his heavy heart almost palpable, Mata wrote at the time:

Today, my blog post is shorter than usual. In fact, it isn’t really a time for posts. I want to thank all of you who support us during these tough times. I understand your frustrations.

It is with great regret we inform you that there are similar scenes over on JuanMata8.com today, post-Anfield.

The 30-year-old eventually entered the fray as an 85th-minute substitute, shortly after Xherdan Shaqiri has sealed the victory with a pair of late deflected goals.

So disheartened by the defeat was Mata that he once again couldn’t bring himself to share his usual regular reflections.

As such, this is all fans got in the cold, stark light of the morning after the night before… 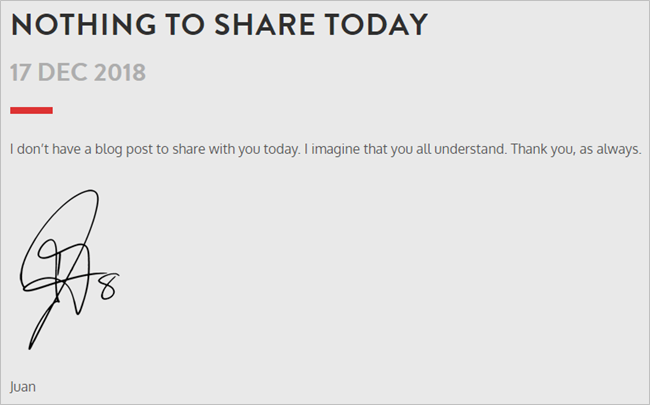 They broke his little heart (again), the callous bastards.