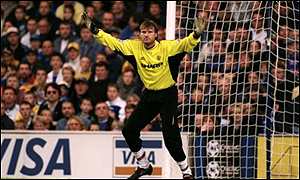 Last week we took a look back at the greatest ever foreign players to grace the Premiership, but you can be sure that for every Bergkamp there’s a Boogers who’s just as rememberedâ€¦but for all the wrong reasons.
So here’s our line up of the worst team of Carlos Kickaballs ever to embarrass themselves in our league before doing the off

Goalkeeper: Massimo Taibi (Manchester Utd)
Who could forget the ‘Blind Venetian’s’ blundering four games at United, which included the embarrassment of a Chris Sutton goal and that Le Tissier pea roller that slipped between his legs. Was popular with the fansâ€¦just not United’s
Centre back: Winston Bogarde (Chelsea)
Not sure how good he was at football but he played excellent hardball when it came to stubborn contract negotiations. The Dutchman refused to accept a pay cut by moving to another club and instead collected Â£40,000 a-week training with the reserves â€“ and even raked in a bonus when his teammates won the FA Cup
Centre back: Elena Marcelino (Newcastle Utd)
For all we know he could have been a girl since no one can actually recall ever seeing him â€“ and his name is Elena. Played 11 games in two years before leaving moaning, “The fans called me a thieving Spaniard and a gypsy who was robbing the club’s cash” â€“ at Â£700,000 a game, they had a point
Centre back: Jean-Alain Boumsong (Newcastle Utd)
Another centre back from Newcastle Utd says all you need to know about the Geordie’s everlasting defensive problems. But Boumsong even made Titus Bramble look good before surprisingly signing for Juventus while they spent a season in Serie B
Left back: Djimi Traore (Liverpool, Portsmouth)
He may have a Champion’s League medal but he still clenched Scouse bum cheeks every time he made a tackle in the penalty area. Like the Michael Jackson inspired ‘Blame it on Traore’ chant goes â€“ “He just can’t, he just can’t, he just can’t control his feet”
Right back: Roque Junior (Leeds)
How could a World Cup and Champion’s League winner look so out of his depth? He was only at Leeds for a few months but the Brazilian played a significant part in the club’s eventual downfall
Central Midfielder: Eric Djemba-Djemba (Manchester United, Aston Villa)
So bad they named him twice? The Cameroon holding midfielder was Fergie’s attempt at unearthing his own Viera – leave the African archeology to Wenger we think. Last seen playing for Burnley
Central Midfielder: Juan Sebastian Veron (Manchester United, Chelsea)
He might have had his moments but not Â£43million worth of them. Cost two clubs a small fortune but the Ali G look-alike couldn’t pay back the favour with either of them â€“ “Is it coz I is crap?”
Left forward: Tomas Brolin (Leeds, Crystal Palace)
If footballers are supposed to treat their bodies like a temple, Brolin’s was a bouncy castle. The cuddly Swede came, saw and ate before his career collapsed and he now sells vacuum cleaners in his native country, which must suck â€“ there’s always a chance of being our site’s mascot if you’re listening Tomas
Right forward: Marco Boogers (West Ham)
Ole ‘Arry might be known for his wheeling and dealing but he’s had a few flops too. Most notably ‘Mad Marco Boogers’ who arrived momentarily to try and assassinate Gary Neville in his first game before disappearing to live in a caravan somewhere in the Netherlands, claiming, “I’m not a mental”
Striker: Ali Dai (Southampton)
We’ve saved the worst for last with a signing that will always send a shudder down Graeme Souness’ spine. The then Southampton manager signed the striker after his agent claimed he was a relation of George Weah with several international caps â€“ it took 53mins and a substitution back off to understand what gullible means