As you might be aware, PSG had their grand Champions League aspirations cruelly halted for yet another season on Wednesday night after being buffeted out of the last-16 by Manchester United.

The tie was settled by a contentious 94th-minute Marcus Rashford penalty, which was given against Presnel Kimpembe for the crime of being caught in possession of non-collapsible upper limbs.

The Parisians were shocked and appalled, none more so than Neymar, who had been forced to watch the drama unfold from the stands at the Parc des Princes due to a foot injury.

Indeed, thoroughly agog at the sporting injustice he’d just witnessed, the Brazilian was barely able to form a coherent sentence when he took to Instagram to share a few of his musing on Instagram after the final whistle. 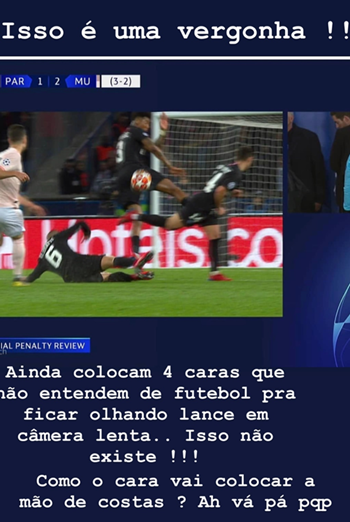 With text pasted over a screen-shot of Kimpembe’s supposed handball, Neymar ranted:

This is a disgrace! They still put four guys (in the VAR review room) who don’t know anything about football to keep looking at slow-motion.

This doesn’t exist!!! How is he (Kimpembe) supposed to put his hands on his back? Ah, fuck off!!

He’s not wrong. It was fairly disgraceful.

On the other hand, if it’s PSG getting screwed over then Pies’ sympathy doesn’t tend to stretch very far either.