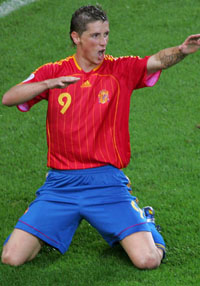 There are bound to be a few more twists to this year’s transfer season, especially if someone remembers where they put Carlos Tevez’s ownership papers, but new TV money and the arrival of more glory hunting billionaires means there’s been plenty of action.
Here’s what we think are the ten best deals done so far:

1 Fernando Torres (Athletico Madrid to Liverpool, Â£20-26m)
Liverpool finally put their money where their mouth is but will El Nino blow hot or cold with Rafa’s rotation policy?
2 Darrent Bent (Charlton to Tottenham, Â£16.5m)
More money than Henry but, even if one leaves, do Spurs now have a better strikeforce than their North London rivals?
3. Owen Hargreaves (Bayern Munich to Manchester United, Â£16m)
From England scapegoat to Roy Keane’s replacement (via a broken leg and bitter standoff) in little over a year â€“ but is Scholes or Carrick going to stand down?
4. Eduardo Da Silva (Croatia Zagreb to Arsenal, Â£7.5m)
The Brazilian-born Croatian is supposedly the ‘fox-in-the-box’ to finish Arsenal’s infinite chances â€“ but the last time Wenger tried that he bought Frannie Jeffers
5. Florent Malouda (Lyon to Chelsea, Â£13.5m)
Incredibly, the only money that Chelsea have spent so far â€“ but does one more winger mean that Robben is flying the nest?
6. Nani and Anderson (Sporting Lisbon & Porto to Manchester United, Â£31m)
“Who and how much?” Latin style replacements for Giggs and Scholes apparently â€“ but how long will it take them to add substance to style?
7. Jonathan Woodgate (Real Madrid to Middlesbrough, Â£7m)
Real Madrid recoup their medical bills and Southgate gets a potentially world-class defender with a worrying fitness record
8. Rolando Bianchi (Reggina to Manchester City, Â£8.8m)
Sven’s first signing comes from the country where he understands the football – Italy! Will have to score more than the last Italian import, Bernado Corradi
9. Mark Viduka (Middlesbrough to Newcastle, free)
Pick of the free signings so far and could link up well with Owen â€“ someone will have to do the running
10. Craig Bellamy (Liverpool to West Ham, Â£7.5m)
The ferret-faced striker was ‘driven’ out of Liverpool but has he found the fairway or the rough at West Ham?