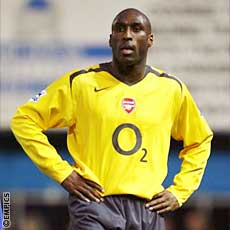 With Fergie refusing Liverpool’s Â£6.8m bid for Gabriel Heinze and claiming United would ‘never’ sell to their bitterest rivals, we take a look at a few transfers that have taken place between clubs with a history of hatred.
It takes rhinoceros thick skin and elephant sized balls but a few players have endured the wrath of supporters to move onto bigger things – here’s our top five:

1. Sol Campbell (Tottenham to Arsenal 2001)
Campbell caused outrage when he ignored foreign interest and decided on a short move across North London â€“ and doing the Double didn’t exactly calm Spurs fans down
2. Luis Figo (Barcelona to Real Madrid 2000)
It took Â£37m for the first Galactico to be born but, while Figo went on to be crowned World Footballer of the Year, taking a corner at the Nou Camp would never be the same again
3. Eric Cantona (Leeds to Manchester United 1992)
It must have taken some sort of Jedi mind trick to convince Wilkinson to part with the inspirational Frenchman for just Â£1.2m â€“ Cantona created a United dynasty while Leedsâ€¦
4. Nick Barmby (Everton to Liverpool 2000)
Barmby actually snubbed Liverpool for Everton when he left Middlesbrough but soon came to his senses and requested a transfer to the club, remembering Liverpool were his ‘boyhood heroes’
5. Lee Clark (Newcastle to Sunderland 1997)
Self-confessed Newcastle nut, Lee Clark, was probably as shocked as anyone when he was sold to Sunderland. But his true colours came out when seen sporting Mackem baiting t-shirt at the Geordie’s cup final â€“ was never in Sunderland again