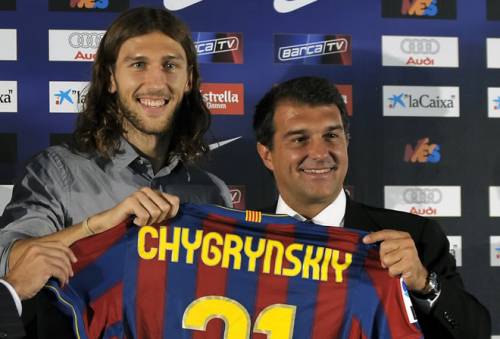 ‘Chygrynskiy’ shirt sales are low, primarily because they cost over £100 to print

Rumour No. 1: Barcelona are preparing to offer Arsenal their Ukrainian centre-back Dmytro Chygryskiy on a twelve-month loan deal in an attempt to lower the price the Gunners are asking for Cesc Fabregas who, you may have heard, has been the subject of some pretty heavy interest from the Barca camp of late. 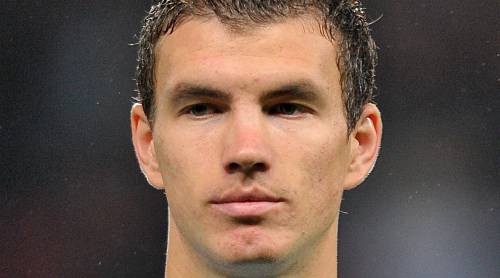 Rumour No. 2: Manchester City are closing in on a £36 million deal to bring Wolfsburg striker Edin Dzeko to the club, despite missing the deadline to trigger the release clause in the striker’s contract.

The Bosnian target man was known to have a €40 million buy-out clause written into his contract with the German side, but it expired on Monday night – although apparently City remain undeterred in their chase for the 24-year-old.

The Best of the Rest: Man City have also bumped Inter Milan flyer Maicon to the top of their summer wishlist, but will face competition from Real Madrid for the Brazilian international.

City are also reported to have made a €35 million bid for Barcelona striker Zlatan Ibrahimovic, although it has fallen a fair way short of the Catalan club’s valuation of the Swedish striker.

Tottenham plan to rebuff any approaches made for Gareth Bale, with Manchester United and AC Milan both being linked with the Welsh left-back.

Manchester United are planning a £12 million swoop for Palermo’s Danish centre-back Simon Kjaer, who has been linked with a move to a host of European teams.

Liverpool are mulling over a move for Manchester City bench-warmer Roque Santa Cruz and may offer £10-million-rated midfielder Yossi Benayoun in part-exchange.

Fulham are on the verge of tying up a pay-as-you-play style deal with Brazilian left-back Fabio Aurelio, who is a free-agent after refusing to sign a similar deal at Liverpool.

Arsenal will allow 19-year-old midfielder Francis Coquelin to join Lorient on loan if it will improve their chances of signing centre-back Laurent Koscielny from the French club.

Chelsea winger Miroslav Stoch is on the verge of completing a £2.5 million move to Turkish giants Galatasaray.

Aston Villa have slapped a £30 million price tag on James Milner in an attempt to deter Manchester City’s interest, but Villa have taken advantage of the open lines of communication with City to enquire about the prospect of signing their £5-million-rated defender Nedum Onuoha.

Hull midfielder Jimmy Bullard is on the verge of completing a season-long loan move to Celtic.